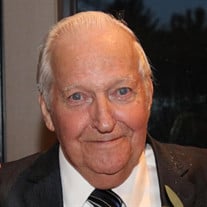 Seabrook Beach – Earl Landon Verity, Sr., age 83, of Seabrook Beach, died peacefully at his home on Saturday, October 19th, surrounded by his family after a brief battle with cancer. Earl was born on June 25, 1936 in Somerville, MA and was the son of the late Ralph and Maybelle (Kinsley) Verity. Earl was an entrepreneur who began his career as a plumber and soon after built a successful real estate business. His passion in life was real estate and he would talk about it with anyone who would listen. Earl got the biggest thrill out of developing land and buying, renting and selling homes throughout MA and NH. One of his earliest projects was building a 96 unit apartment building in Medfield, MA with four other partners. However, some of his proudest achievements were working closely with his children. These projects included, the Waysider Restaurant & Motel, the Mall at Granite Square in Hampton Falls, NH, and also A-1 Stateline Storage in Salisbury, MA. Earl leaves behind his beloved wife of 62 years, Barbara (Rich) Verity. Not only were they husband and wife, but they were also business partners, best friends, world travelers, and restaurant connoisseurs. In addition to his wife, Earl is survived by his three children, Earl Verity, Jr. and girlfriend Kelly Scamman of Stratham, Robin Bragger of Seabrook, and Deane and Karen Verity of Hampton. He will also be missed by his five devoted grandchildren Joshua Verity of Hampton, Ashley Moore and her husband Matthew of Haverhill, MA, Shane Verity and his wife Amanda of Hampton, Marc Verity of Waterbury, VT, and Morgan Bragger of Exeter. He adored his five great grandchildren, Adam, Lillian, Colton, Delilah and Everett. Earl is survived by his two sisters, Lynda Verity and Ruthie Matckie, his sister-in-law, Mary-Jo Verity, and many nieces and nephews. Services will be held at 1:00 PM Sunday, October 27, 2019 at the United Methodist Church, 525 Lafayette Road, Hampton. Relatives and friends are invited to attend the service and luncheon following at the church. In lieu of traditional remembrances, the family respectfully requests that donations be made to Beacon Hospice, c/o Amedisys Foundation, 25 New Hampshire Avenue Suite 270, Portsmouth, NH 03801 or via www.amedisys.com.

Seabrook Beach &#8211; Earl Landon Verity, Sr., age 83, of Seabrook Beach, died peacefully at his home on Saturday, October 19th, surrounded by his family after a brief battle with cancer. Earl was born on June 25, 1936 in Somerville, MA and... View Obituary & Service Information

The family of Earl L. Verity created this Life Tributes page to make it easy to share your memories.