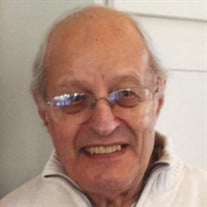 Edmond Joseph Wakeen, age 91, of Hampton, New Hampshire died peacefully at home with his loving wife of 65 years by his side, on Sunday, January 2, 2022. Edmond lived with Alzheimer’s Disease for many years; yet his love, gratitude, compassion and humor always shone through. He was a gentle, pious, loving man and will be missed by many. Edmond was born in Worcester, Massachusetts in 1930. He was the son of the late Nicholas and Regina (Nasby) Wakeen. Edmond graduated from North High School in Worcester and thereafter joined the U.S. Navy where he was stationed in the Panama Canal Zone for two years. Upon leaving the Navy, Edmond attended college at the University of Oklahoma where he graduated in 1957 with a degree in Nuclear Physics. After his marriage to Catherine Gallagher in 1957, the couple moved to Culver City, California where Edmond worked for Howard Hughes Aircraft Company. He was involved with the space program and wrote many books on the subject. In 1960, the couple chose to settle in Tewksbury, Massachusetts to raise their family where they resided for 27 years. During this time, Edmond was a communicant of St. William’s Church and participated in much volunteer work. He also very much enjoyed coaching his son’s little league teams. After working 14 years at Avco Research and Development Company in Everett, Massachusetts, Edmond embarked on an adventurous change of career and began frequently traveling to Madras, India, where he organized a large factory for Pierce Leather Imports. He later worked for the Booker T. Washington Foundation in Washington, DC, obtaining grants for under-served communities until his retirement in 1987 at which time he and Catherine moved to Hampton, NH. Edmond was a communicant of Our Lady of the Miraculous Church in Hampton and was a member of the Holy Name Society, Knights of Columbus, St. Joseph’s Men’s Club. He was a very religious man, and his faith was undying. Edmond made lasting friendships while volunteering at the food pantry for St. Vincent De Paul Society, dedicating ten selfless years of service to help those in need. Edmond was a devoted husband; his love for his wife was always new. His greatest joys were spending time with his family, walking along the beach, playing a good game of golf and sitting with friends during his morning excursions to the local coffee shop. Edmond is survived by his loving wife of 65 years, Catherine (Gallagher) Wakeen and his six children: Michael Wakeen and his wife Jean, Methuen, MA; Shawn Wakeen, Redondo Beach, CA; David Wakeen and his wife Victoria, Clearwater, FL; Ann Marie Wakeen, Woodbury, VT; Paula (Wakeen) Warner and her husband Eric Warner, Plum Island, MA; Nancy (Wakeen) White and her husband Dustin White, Salem, NH. Edmond was also dearly loved by 13 grandchildren: Shane Wakeen and his wife Jenni, Derek Wakeen, Catherine O’Brien, Kendra Wakeen, Matthew Warner, Andrew Grasso, Harry O’Brien, Brian Warner, McKenzie White, Mikayla Mae White, Devon White, Colin White, and Sophia Wakeen. Edmond was truly blessed to know his two great-grandsons, Tyler and Mason Wakeen, who brought him much joy. Edmond was predeceased by his sister Lucille Wakeen and his brothers Kenneth and Francis Wakeen and is survived by several nieces and nephews. Services: A private, family Mass of Christian Burial will be held at Our Lady of Miraculous Medal Church at a future date to be announced. Burial will take place in High Street Cemetery, Hampton, NH. In lieu of flowers, if desired, donations may be made to OLMM Outreach Program located at 289 Lafayette Road, Hampton, NH 03842.

Edmond Joseph Wakeen, age 91, of Hampton, New Hampshire died peacefully at home with his loving wife of 65 years by his side, on Sunday, January 2, 2022. Edmond lived with Alzheimer&#8217;s Disease for many years; yet his love, gratitude,... View Obituary & Service Information

The family of Edmond J. Wakeen created this Life Tributes page to make it easy to share your memories.