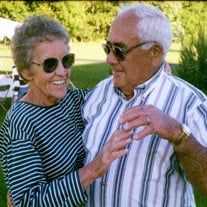 Rye – Edna T. Sherwin, 92, of Rye, died Saturday, July 13, 2019 at Portsmouth Regional Hospital shortly after the death of her son Edward Sherwin who died July 12, 2019. She was born in East Boston, MA December 17, 1926, the daughter of the late Edward and Mary (McDonald) Farmer. Edna was the wife of the late beloved Richard P. Sherwin who predeceased her in 2007. Family was the most important thing in Edna’s life, especially being Nana to her grandchildren and great grandchildren. She was known for her Mac & Cheese, her whoopie pies, and for her wood stacking skills. Friends and family will remember her enduring love for her husband, her energetic personality, and the love and care she bestowed on others. Family members include children, Richard J. Sherwin and his wife Carol of Hampton, Jacqueline Sherwin, wife of the late Edward Sherwin of Rye, Muriel Coulstring and her husband Brian of Newmarket, Thomas Sherwin and his wife Alicia of Newfields, 10 grandchildren, 7 great grandchildren, her brother, William Farmer of Brighton, MA, nieces and nephews. She was predeceased by her son Edward Sherwin and two sisters, Catherine Fay and Muriel Farmer. Visiting hours and services will be held jointly for Edna and Edward. Visiting hours will be held from 3-5 P.M. Sunday, July 21, 2019 at the Remick & Gendron Funeral Home-Crematory, 811 Lafayette Road, Hampton. Services will follow Monday July 22, 2019 at 11 A.M. in the funeral home. Burial will be in Central Cemetery, Rye. Relatives and friends are respectfully invited. In lieu of traditional remembrances, donations may be made to Rye Public Library, 581 Washington Rd, Rye, NH 03870.

The family of Edna T. Sherwin created this Life Tributes page to make it easy to share your memories.

Send flowers to the Sherwin family.