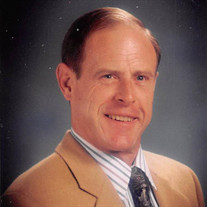 Hampton – Edward Robinson “Sandy” Buck, III, 71, passed away peacefully at the Lahey Hospital in Burlington, MA on Monday, August 14, 2017. Sandy was born in Boston, MA, the son of the late Edward R. and Frances (Davis) Buck, Jr. He was raised in Falmouth, MA and graduated from Lawrence High in Falmouth with the Class of 1964. Sandy went on to earn his Bachelor’s Degree in Economics in 1968 and his Master’s Degree in Educational Technology in 1970, both from Syracuse University where he was a member of the Sigma Chi Fraternity and served as President of the Sigma Chi Alumni Association from 1968-1970. Upon graduating from college he entered the data processing management field with IBM and AT&T. He lived in Union, NY and then Asbury, NJ where he began his career in politics. Sandy served on the Planning Board in Union, NY and was also a member of the Union Township, NJ, School Board and served as President of the School Board from 1980-1981. Sandy met Sharon Call, his future wife, at a conference in 1984 and they relocated to Hampton in 1989. Sandy continued his community service through involvement with the Hampton Planning Board, Budget Committee, USS Hampton Committee, Hampton Academy Facilities Committee, served on the Capital Improvement Program Committee and was a regular volunteer for the Hampton Beach Seafood Festival. He was a substitute teacher at Winnacunnet High School and also earned his real estate license. He was actively involved with the Hampton Rotary Planning and Budget Committees and served as Director of the Rotary Foundation and had many years of perfect attendance at Rotary meetings. At the time of his death, Sandy was serving his eighth term as the Rockingham County Treasurer. Sandy was also a member of the First Congregational Church where he very much enjoyed serving as a roving ambassador for the Sunday School. He enjoyed traveling with Sharon, reading, and their long walks on the beach together. In addition to Sharon, his wife of over 23 years, Sandy is survived by his sons, John Buck and his wife Erin of Bangor, PA, Christopher Buck of Asbury, NJ and Michael Buck and his wife Maria of Clarence, NY. Sandy also leaves his beloved grandchildren, Thomas, Abigail, Demetre and Isabella. Visiting hours will be from 2 to 5 pm on Sunday, August 20, 2017 in the Remick & Gendron Funeral Home – Crematory, 811 Lafayette Rd., Hampton. Services will be held at 11 am on Monday at the First Congregational Church, 127 Winnacunnet Rd., Hampton. Burial will be in the High Street Cemetery. The family suggests donations to The Rotary Club Foundation of Hampton, P.O. Box 353 - Hampton, NH 03843-0353 or to the First Congregational Church, 127 Winnacunnet Rd., Hampton, NH 03842.

The family of Edward Robinson "Sandy" Buck III created this Life Tributes page to make it easy to share your memories.

Send flowers to the Buck family.