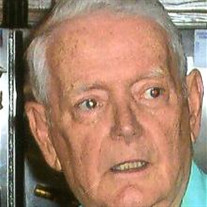 Hampton – Edward J. Desmond, 91, of Hampton, died Sunday, August 9, 2015 at the Exeter Hospital surrounded by his loving family. Mr. Desmond was born in Amherst, MA on May 8, 1924 and was the son of the late James F. and Susan V. (Martin) Desmond. Raised in Amherst, he was a graduate of Amherst High School and received his associate’s degree from the Stockbridge School at UMass Amherst. He was a US Navy veteran of WWII and upon discharge from the Navy, Mr. Desmond worked for the Amherst Creamery. He retired from the Amherst Post Office in 1984 after 30 years of service as a Postal Clerk. He was a life member of the Veterans of Foreign Wars. Mr. Desmond loved working on crossword puzzles and watching the Bob Ross painting show on television. Mr. Desmond shared 43 years of marriage with the love of his life, Mary T. (Ozzolek) Desmond, who died in 1995. Edward and Mary enjoyed traveling together and had visited Canada, Ireland and Italy. Family members include a daughter, Catherine Searles and her husband, Stephan of Hudson; four sons, David Desmond and his wife, Ana of Bow, Michael Desmond and his wife, Susan, of Leeds, MA and Aleck Desmond and James Desmond, both of Hampton; a brother-in-law, Joseph Leal of South Hadley, MA; four grandchildren and several nieces and nephews. Visiting hours will be Thursday, August 13, 2015 from 5 to 7 P.M. in the Remick & Gendron Funeral Home-Crematory, 811 Lafayette Road, Hampton. A Mass of Christian Burial will be celebrated Friday at 11 A.M. in Our Lady of the Miraculous Medal Church, 289 Lafayette Road, Hampton. Interment will be in St. Brigid Cemetery, Hadley, MA at a later date. In lieu of flowers, donations may be made to the charity of one’s choice.

The family of Edward J. Desmond created this Life Tributes page to make it easy to share your memories.

Send flowers to the Desmond family.