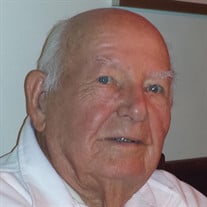 Hampton – Edward W. Lindstrom, 97, a longtime Hampton resident, died peacefully on Tuesday, July 31, 2018, at Exeter Hospital. Eddie was born in the Bronx, NY on September 20, 1920, one of nine children to the late Otto Alfred Lindstrom and Tyra (Fagerholm) Lindstrom. Raised in an orphanage in the Bronx, he attended local schools and went on to enlist in the United States Navy. He proudly served for six years, seeing action in six major naval battles, one of which was the invasion of Guadalcanal where his ship, The USS Vincennes, was sunk during the battle of Savo Island. After his time in the service, Ed started his career at Sandvick Steel, during which time he lived in Chicago, IL, and later, Paterson, NJ. After his retirement, he worked in antiques with his late wife of 62 years, Doris B. (Graves) Lindstrom. Eddie was a former member of the American Legion Post 35 in Hampton and avid Red Sox fan, who enjoyed woodworking, fishing and spending time with his family. Ed is survived by his son, Paul R. Lindstrom and his wife, Eileen, of Hampton, granddaughters, Michelle Lindstrom of Philadelphia, PA and Tyra Lindstrom of Cranford, NJ, and several nieces, nephews and cousins. In addition to his parents and wife, he was predeceased by his daughter, Gail Ann Lindstrom in 1979. Services will be private. In lieu of flowers, donations may be made to the American Diabetes Association P.O. Box 15829, Arlington, VA 22215.

The family of Edward W. Lindstrom created this Life Tributes page to make it easy to share your memories.

Send flowers to the Lindstrom family.