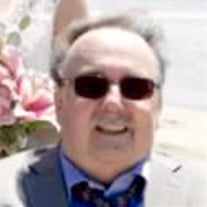 Hampton – Edward W. Long, Jr., 67, of Hampton, died Saturday, February 13, 2106 at his home. He was born in Lowell, Mass., April 16, 1948 a son of M. Laura (Coutu) Long Fuller of Lowell and the late Edward W. Long. Ed moved to Hampton as a teenager and graduated from Winnacunnet High School and later the University of New Hampshire. He was a veteran of the US Army serving with the 173rd Airborne Division during the Vietnam War as a special photo journalist and was the recipient of the Purple Heart. He served as a tax accountant and representative, owning and operating E.W. Long & Associates, in North Hampton retiring in 2014 after 27 years. For many years he coached for the Hampton Youth Association and was active in his community. In addition to his mother, he leaves his wife of 35 years, Pamela A. (Pendleton) Long of Hampton, two sons, Edward W. Long, III and his wife Stephanie of Dover, Robert C. Long of Hampton, his daughter, Valerie Long Thomas and husband Arthur of Epping, two brothers, James O. Long and wife Cynthia of Dracut, MA, Michael P. Long and partner Kenneth Aloisi of Lynnfield, Mass., his sister, Patricia Farrell and her husband John of Seabrook, many nieces and nephews. Visiting hours will be from 4-7 P.M. Wednesday, February 17, 2016 at the Remick & Gendron Funeral Home-Crematory, 811 Lafayette Road, Hampton. Services will be held at 12 noon on Thursday, February 18, 2016 in the chapel at St. Joseph Cemetery, 96 Riverneck Road, Chelmsford, Mass. Relatives and friends are respectfully invited.

The family of Edward W. Long Jr. created this Life Tributes page to make it easy to share your memories.

Send flowers to the Long family.