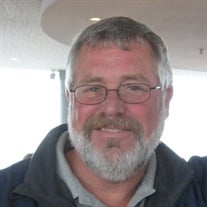 Rye – Edward F. Sherwin, 66, of Rye, passed away Friday, July 12, 2019 at his home. He was born in Stoneham, MA on August 8, 1952, the son of the late Richard P. Sherwin and Edna (Farmer) Sherwin, who passed away Saturday July 13, 2019 shortly after learning of Edward’s death. Ed attended St. Mary’s High School in Lynn, MA and was a proud graduate of Massachusetts Maritime Academy in Buzzards Bay, MA with the Class of 1974. He served as Chief Engineer and traveled the world with the US Merchant Marines for 29 years, retiring in 2003. Ed was an avid saltwater fisherman, enthusiastic gardener, and loved to cook, but his family brought him his greatest joy. He was a dedicated husband, father, and grandfather. He also enjoyed spending time outside with his dog, Tobey. He and his wife Jacqueline (Blood) Sherwin shared 36 years of marriage. In addition to his wife he leaves three children, Catherine Sherwin-Gupta and her husband Sverge of Hanover, MA, Abbie Sherwin of Portsmouth, Daniel Sherwin and his wife Cori Ann of Acton, MA, his granddaughter Olivia Gupta, three siblings, Richard J. Sherwin and his wife Carol of Hampton, Muriel Coulstring and her husband Brian of Newmarket, Thomas Sherwin and his wife Alicia of Newfields, nieces and nephews. Visiting hours and services will be held jointly for Edward and Edna. Visiting will be held from 3-5 P.M. Sunday, July 21, 2019 at the Remick & Gendron Funeral Home-Crematory, 811 Lafayette Road, Hampton. Services will follow at 11 A.M. Monday July 22, 2019 in the funeral home. Burial will be in the Central Cemetery, Rye. Relatives and friends are respectfully invited. In lieu of traditional remembrances, donations may be made to The Leukemia Lymphoma Society, 3 International Drive, Suite 200, Rye Brook, NY 10573.

The family of Edward F. Sherwin created this Life Tributes page to make it easy to share your memories.

Send flowers to the Sherwin family.