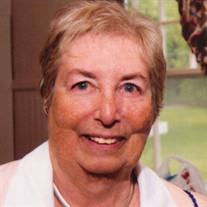 Exeter - Edwina Kuhn Scharff slipped peacefully from this earth on September 16, 2020. Born in New Rochelle, New York, on October 29, 1926, Edwina attended the Scarborough-on-Hudson School and Bard College, graduating from the Columbia College of Physicians and Surgeons as a physical therapist in 1949. Throughout the Second World War, Edwina was active in the war effort, volunteering with Bundles for Britain and knitting socks for sailors. Edwina was married for over seventy years to her beloved husband, Monroe B. Scharff “Monty” who pre-deceased her last year. Monty affectionately referred to Edwina as “Blue Eyes.” Monty and Edwina lived in Scarsdale, New York, raising two boys, Peter and Stuart until moving full time to Kennebunkport, Maine. The last years of Edwina’s life were spent with Monty at Riverwoods in Exeter, New Hampshire. Edwina was fiercely devoted to her family, thoughtful, optimistic, quiet in demeanor but possessed of an insurmountable personal strength and sense of self. Edwina fought a courageous battle with Parkinson’s disease for over 13 years, never once complaining, always showing her family unconditional love, delivered with a wry, twinkling humor and a positive attitude. Even in her most challenging personal moments, Edwina thought first of others, ever the gracious hostess in her home and concerned about the comfort and happiness of everyone around her. Edwina was a lover of brownies (served to all who visited) and anything that involved dark chocolate. A life-long supporter of the arts, Edwina was particularly interested in Southwestern art, indigenous American pottery, paintings, jewelry and the colors yellow and purple. Edwina was a talented potter, gracing her own home and those of her children with her creations. Her favorite times were spent quietly reading or completing jigsaw puzzles at her cottage in Bridgton, Maine, and in supporting all of Monty’s endeavors at their home in Kennebunkport, Maine. Edwina loved accompanying Monty on adventures “Downeast” to Camden, Maine, skiing in Vermont, sailing with Monty on their Cape Dory sloop in the Kennebunk River and spending several weeks every year in Sarasota, Florida. Edwina is survived by her sons, Peter B. Scharff and his wife, Janet, of Briarcliff Manor, NY, Stuart M. Scharff and his wife, Jodi, of Rye, NH, four grandchildren, Rachel, Christopher, Emily and Jenny and two great grandchildren, Annabel and Caleb. The family expresses their deepest thanks and appreciation to the wonderful staff at Riverwoods in Exeter, NH, and her amazing caregivers from Extended Family in Portsmouth, NH. All of these individuals enabled Edwina to live independently for as long as possible as she battled with Parkinson’s. In lieu of flowers, please consider a contribution in Edwina’s memory to any one of her favorite causes, the Hospice of Southern Maine, Doctors Without Borders or the Portland Museum of Art. A celebration of Edwina’s life will be held privately with the family at a later time.

The family of Edwina Kuhn Scharff created this Life Tributes page to make it easy to share your memories.

Send flowers to the Scharff family.