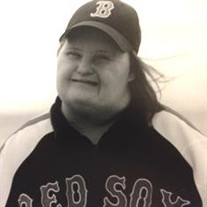 Portsmouth - Eliza Ellen Gifford, named for her grandmothers, was born April 25, 1951, in West Stewartstown, NH. Her parents, Dr. William H. Gifford and Dr. Marjorie A. Parsons, determined early on that despite her disability, Eliza would live a full life. And did she ever! At that time there was no special ed. in the schools, so Sister Mary Edward from Our Lady of Grace Academy taught Eliza to read and write. Later, the Vershire sheltered workshop was founded, and Eliza and many others learned life skills. Growing up in Colebrook, Eliza participated fully in town life. She marched in every Fourth of July and Memorial Day parade, she played with all the local children, she was very active in St. Stephen’s Episcopal Church, and she developed a life-long enthusiasm for sports when she could be found loudly cheering for the Colebrook Academy Mohawks basketball team at every home game. She was one of the most rabid Red Sox fans ever known – but she never forgave them for trading Johnny Damon! Many a night at Great Bay was spent with her friends watching Tom Brady and the Patriots. Eliza was not shy…to say the least, and she could be enterprising. Her parents shared a waiting room for their patients, and each had separate offices off the waiting room. One day her mother was sitting at her desk and heard the following exchange: Eliza to a patient: “Would you like some good advice?” Patient: “Yes, I’d like some good advice.” Eliza: “It will cost you ten cents.” Patient: “I guess good advice is worth ten cents.” Money was exchanged, and Eliza promptly handed the patient a Salada Tea bag label, which at that time had quotes and sayings printed on it. Both parties to the exchange were pleased. When Eliza turned nineteen, she left home to live at Great Bay in one of the very first group homes in New Hampshire. It was at Great Bay and Christ Church that she found many new friends who became her second family. Over the years Eliza worked in a variety of jobs. Her last major job was working for Beswick Engineering where she “put o-rings on screws.” She absolutely loved working there, and everyone treated her with kindness and respect. After retiring from Beswick, she spent time volunteering at Fair Tide among other endeavors. Eliza was a well-traveled woman. She went on Disney cruises; visited Hawaii and Branson, Missouri; and made a “pilgrimage” to Graceland to pay homage to her favorite singer, Elvis. Eliza loved music of all kinds and knew the words to hundreds of songs from nursery-rhyme ditties to Elvis tunes and Broadway shows. Her absolute favorite was The Sound of Music. In the 1990’s Eliza began to paint. She stopped for a while and then picked it up again a few years ago. She was amazing! Her works ran the gamut from straight representational works to abstracts, such as her painting called “Gum Tree” that one of her sister’s colleagues thought might be by Hundertwasser. However, all the paintings were the same in one major way: they were either beautiful or full of happy colors and activities which reflected Eliza’s outlook on life. Eliza had some of the very best people skills. When her mother died, she and all of her siblings had been living away from Colebrook for many years. As people came to pay their respects, Eliza knew the names of every one of them. Her sister Bonnie could recognize the family someone was from, but for the life of her, she couldn’t pull up the names. She asked Eliza how she was able to remember everyone. Eliza looked at her Bonnie in amazement and simply said, “I took the time to get to know them.” Yup, she took the time to get to know them. And they, in turn, knew Eliza. She was one of the richest people ever when she died on January 14, 2016. She had, and still has, hundreds of friends. Eliza is survived by her sister Bonnie Stevenson and her husband Bill; her brother Dr. William P. Gifford, his wife Roz and their son Paul; her niece Heather Jackson and her husband John and children Bryn Clair and Aislyn Gail; her nephew Ian Stevenson, his wife Chris and son Jack Aubrey; and her brother-in-law Warren Fick. She was predeceased by her parents and her sister Gail Shane. A memorial service is being held at 11 a.m. on Monday, January 18, 2016, at Christ Church, 1035 Lafayette Road, Portsmouth. A committal service will be held in Colebrook at a later date. Donations of remembrance may be sent to Great Bay Services, 2061 Woodbury Avenue, Newington, NH 03801. http://www.greatbayservices.org/

Portsmouth - Eliza Ellen Gifford, named for her grandmothers, was born April 25, 1951, in West Stewartstown, NH. Her parents, Dr. William H. Gifford and Dr. Marjorie A. Parsons, determined early on that despite her disability, Eliza would live... View Obituary & Service Information

The family of Eliza Ellen Gifford created this Life Tributes page to make it easy to share your memories.