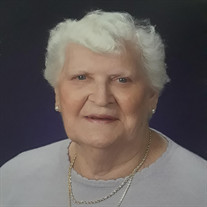 Rye – Elizabeth L. “Betty” Carlsen, 95, a resident at Webster at Rye the past 17 years died Wednesday, October 3, 2018 at her assisted living residence. She was born in Eliot, ME November 27, 1922 a daughter of the late Francis E. and Dorothy A. (Manson) Dixon and graduated from Eliot High School in 1941. A homemaker, Mrs. Carlsen was a member of the Rye Congregational Church; the church choir and the Women’s Fellowship of the church. She shared 57 years of marriage with her late husband Norman F. Carlsen, Sr. who died in 1999. Family members include three sons, Kyrre L. Carlsen of Sparks, NV, Kevin J. Carlsen of Indianapolis, IN, Kris A. Carlsen of North Conway, two daughters, Kathryn E. Carlsen of Dover, Kim A. Geisinger of Indianapolis, IN, 11 grandchildren, 8 great grandchilden, nieces and nephews. In addition to her husband she was predeceased by her first son, Norman F. Carlsen, Jr., and her brothers, Francis, Robert, Howard, Kenneth and Wayne Dixon. Private interment will be in the Central Cemetery, Rye. If desired, donations may be made to The Rannie Webster Foundation, c/o Webster at Rye, 795 Washington Road, Rye, NH 03870. Arrangements are by the Remick & Gendron Funeral Home-Crematory, Hampton.

The family of Elizabeth L. Carlsen created this Life Tributes page to make it easy to share your memories.

Send flowers to the Carlsen family.