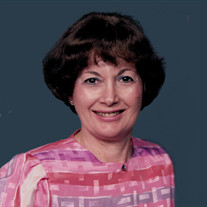 Hampton - Elizabeth (Kalashian) Syphers, 86, of Hampton, passed away on Tuesday, October 27, 2015, following an illness. She shared 60 years of marriage with the late Roger A. Syphers who died on April 20th of this year. She was born in Newburyport, MA on May 25, 1929, a daughter of the late Dickran S. and Irene H. (Deeran) Kalashian, both of Armenian descent. Elizabeth was a 1947 graduate of Newburyport High School and also graduated from Lynn Burdett Business School in 1948. She truly enjoyed her career in the banking industry; she loved helping people, co-workers, customers, and her community, no matter who it was, everyone became her friend. Before graduation, she was offered a position at the Newburyport Five Cent Saving Bank that began her career in banking. Roger and Liz moved to Hampton to raise their family and in the late 60’s Liz returned to banking with the Hampton National Bank. She retired from banking in 1992 but continued to help manage her husband’s two businesses, Seacoast Driving School and Syphers’ Monument Company. She was a member of the First Congregational Church of Hampton for over 50 years where she served as treasurer and as a member of several boards over the years. Elizabeth was also a member of the Bellville Church of Newburyport where she taught Sunday school and where she and Roger married in 1954. Liz was a loving wife, mother and Grammy and a devoted cat lover, nothing was more important to her than her family and her pets. She enjoyed spending time with her family and sharing stories of her Armenian heritage and always looked forward to holidays and special occasions with her family all together. She leaves her two sons, Roger C. Syphers of Hampton and Richard T. Syphers and his wife Janice of Amesbury, MA. She is also survived by her sister, Rosalie Wilson of Newburyport; her extended family members and friends, Buddy and Emily Syphers, of Burbank, CA, Bruce Syphers of Greenland and Zoe Ann Moulton, who was like a sister to Liz, and Zoe’s husband Les of Wells, ME, Priscilla Zoffoi and her companion, Dennis Vickery of Stratham and her sister-in-law Bonnie Syphers of Manchester. She also leaves her four grandchildren, Ashleigh E. Syphers of Amesbury, Madison E. Syphers of Portsmouth, Nicole Gikas and her husband Van of Peabody, MA and Jason Austin of South Boston, MA; her six beloved great grandchildren, Achilles and Elani Gikas of Peabody and Blake, Mason, Ellis, and Jayden Austin of Reading, MA and several nieces and nephews. Liz will be sadly missed by all who knew and loved her. In addition to her parents and her beloved husband Roger, Liz was predeceased by her brother-in-law, Richard Syphers. Visitation will be from 2 to 5 PM on Sunday, November 1, 2015 in the Remick and Gendron Funeral Home – Crematory, 811 Lafayette Rd., Hampton. Services with be held at 11 AM on Monday, November 2, in the First Congregational Church, 127 Winnacunnet Rd., Hampton. Burial will be in Hampton’s High Street Cemetery. Relatives and friends are respectfully invited. In lieu of flowers, donations may be made to the First Congregational Church, 127 Winnacunnet Road, Hampton, NH 03842.

Hampton - Elizabeth (Kalashian) Syphers, 86, of Hampton, passed away on Tuesday, October 27, 2015, following an illness. She shared 60 years of marriage with the late Roger A. Syphers who died on April 20th of this year. She was born in Newburyport,... View Obituary & Service Information

The family of Elizabeth "Liz" Syphers created this Life Tributes page to make it easy to share your memories.

Send flowers to the Syphers family.