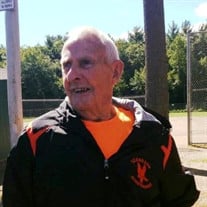 Seabrook- Elliot L. Eaton, 91, of Seabrook, passed away peacefully on Sunday, May 3, 2020. Elliot was born in Seabrook on September 9, 1928, son of the late William and E. Gertrude (Pierce) Eaton. Elliot shared over 64 years of marriage with his wife and love of his life, the late Colleen (Littlefield) Eaton who died in 2015. An honorable veteran of the Korean War, Elliot served in the Army from 1951-1953 with the 3583rd Transit Truck Company in Germany under General Eisenhower and he had been a member of the Raymond E. Walton, American Legion Post 70 for over 68 years. He has held had many jobs in his life including police officer, call fireman, and town constable. Elliot was also a security guard for Yankee Greyhound and a foreman for Welpro Shoe. Additionally, he owned and operated Eaton’s Shellfish for many years and had been an active member of the Seabrook Recreation Committee. Elliot never really retired, he was always out and about and most people could find him at the town dump or local salvage yards with Tom. Elliot loved all kinds of sports including hunting and fishing. In his younger days, he was known for his great pitching arm and actually had an interview with the Atlanta Braves. He loved to go to his camp in Bartlett, NH and he also enjoyed his hunting trips to Maine with his friends. What he enjoyed the most was spending time with his family and many friends. You could always find Elliot at his grandchildren’s sporting events, he would be at them all! Elliot is survived by his three daughters, Evelyn Felch and her husband Tom, Barbara Ward and Joy MacKenzie and her husband Scott, all of Seabrook. He also leaves his six grandchildren, Wayne, Erin, Elliot, Vera, Brent, and Kristen, his ten great grandchildren, Ryan, Nathan, Kerri, Nickole, Colby, Sonya, Sage, Rori, Bodey, and Layla and his six great great grandchildren. In addition to his beloved Collen, Elliot was predeceased by his six brothers, 4 sisters and his son-in-law Michael Ward. Due to the pandemic, services will be private. Flowers will be accepted, but if desired, please remember Elliot through a donation to the Rand Memorial Church.

Seabrook- Elliot L. Eaton, 91, of Seabrook, passed away peacefully on Sunday, May 3, 2020. Elliot was born in Seabrook on September 9, 1928, son of the late William and E. Gertrude (Pierce) Eaton. Elliot shared over 64 years of marriage with... View Obituary & Service Information

The family of Elliot L. Eaton created this Life Tributes page to make it easy to share your memories.