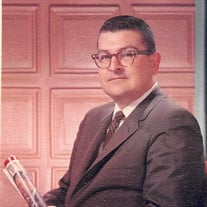 Yarmouth, ME - Elwood C. Wilbur, 94, of Hampton, NH, and Damariscotta Lake, ME died March 21, 2018 at the Coastal Manor Home in Yarmouth where he had been living due to failing health. He was born June 6, 1923, in Providence RI, the son of the late Elmer C. and Helen (Gulland) Wilbur. His was a graduate of the Mount Herman School and attended Colgate University, where he played football and was a member of Sigma Nu fraternity before enlisting in the U.S. Army in December 1942. Mr. Wilbur served in General Patton’s 3rd U.S. Army in France during World War II where he was awarded the Bronze Star, Purple Heart, and Combat Infantry Badge. He was a life member of the Veterans of Foreign Wars, Disabled American Veterans, and the 26th Yankee Division Veterans Association. He worked 33 years in banking and finance, retiring in 1981 as Vice President of the Exeter Banking First New Hampshire Bank. He and his late wife also owned and operated a motel business in Hampton for many years. Mr. Wilbur was a member of St. James Lodge #102 of Hampton of the Masons and a charter member of William Pitt Tavern Lodge #1789 of Portsmouth. He belonged to the York and Scottish Rite Bodies, and the Bektash Shriners of Concord, N.H. He was a former member of the Portsmouth Rotary Club, the Warwick Club and a Past President of the Portsmouth Shrine Club. He was active in scouting, serving as District Chairman and Assistant District Commissioner of the Daniel Webster Council, Boy Scouts of America. The widower of Alice (Geer) Wilbur, who died in 1992, he was predeceased by his brother, Ronald D. Wilbur and is survived by his sister, Eleanor (Wilbur) Hubbard of Dayville, CT and his sons, Elwood C. Wilbur, Jr., and his wife Wendy of Montgomery, TX, David M. Wilbur of Hampton, NH, and Thomas C. Wilbur and his wife Gail of Ewing, NJ and his daughter, Katherine A. Wilbur of Portland, ME. Mr. Wilbur also leaves his five grandchildren, Karen A. Wilbur, Jeffrey D. Wilbur, Dana Wilbur, Kaitlin Wilbur, and Megan Laura Wilbur and many great grandchildren. There will be no calling hours or memorial services. Private internment will be in the High Street, Hampton Cemetery. In lieu of flowers, memorial donations may be made to the Shriners Hospitals of Boston MA (donate.lovetotherescue.org).

Yarmouth, ME - Elwood C. Wilbur, 94, of Hampton, NH, and Damariscotta Lake, ME died March 21, 2018 at the Coastal Manor Home in Yarmouth where he had been living due to failing health. He was born June 6, 1923, in Providence RI, the son of... View Obituary & Service Information

The family of Elwood C. Wilbur created this Life Tributes page to make it easy to share your memories.

Send flowers to the Wilbur family.