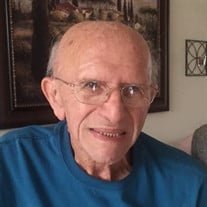 North Hampton – Emilio A. “Tony” Casella, 93, of North Hampton, passed away on Friday July 12, 2019 at the Partridge House in Hampton with his loving wife at his side. He was born in Syracuse, NY November 23, 1925 a son of the late Ralph and Caroline (Condi) Casella. Tony graduated from Traip Academy in Kittery, ME with the Class of 1943. He was a veteran of WW II serving with the US Army, Company 1 331st Infantry Regiment with military police detachment in the European Theater, Rhineland and Ardennes. He was the recipient of the Purple Heart. After the war he was employed as an inspector at the Portsmouth Naval Shipyard retiring in 1981 with 37 years of service. He made his home year round in North Hampton over the past 3 years after wintering in Lakeland, Winter Haven and Davenport, FL for over 37 years. He was known as Mr. Fix it and always had a project in progress, he also enjoyed gardening. He shared 38 years of marriage with his wife Shirley A. (Renaud) Casella. In addition to his wife he leaves five children, Michael Casella and wife Denise of Watertown, MA, Jill Ferguson and husband John of Gilford, Linda Graves and husband Jay, Patricia Watson and husband Robert all of Greenland, Robert O’Leary, Jr. and wife Laura of Rochester, 11 grandchildren, 13 great grandchildren, several nieces and nephews including Lynn Martel. He was predeceased by siblings, Ralph Casella, Jr.,Eleanor Flaherty and his daughter, Toni Jean Leonard. A private graveside service will be held at the New Hampshire State Veterans Cemetery, 110 Daniel Webster Highway, Boscawen. In lieu of traditional remembrances donations may be made to the American Cancer Society, PO Box 22478, Oklahoma City, OK 73123. Arrangements are by the Remick & Gendron Funeral Home-Crematory, Hampton.

The family of Emilio A. Casella created this Life Tributes page to make it easy to share your memories.

Send flowers to the Casella family.