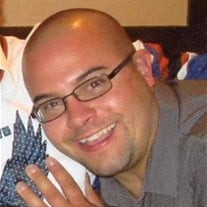 Seabrook – Eric Thomas Tatarinowicz, 30, of Seabrook and a former longtime resident of Hampton Falls, died suddenly on Monday, February 15, 2016 from injuries sustained in a snowmobile accident in Pittsburg, NH. He was born in Manchester, NH on May 3, 1985, the son of Carol A. Tatarinowicz of Hampton Falls and the late Richard W. Tatarinowicz. Eric spent his early years in Derry and Kingston before his family moved to Hampton Falls in 1995. He was an outstanding soccer player and had played on the travel team for Seacoast United. He attended Winnacunnet High School where he continued to excel in soccer, was a member of the JROTC and at which time he earned his Eagle Scout rank and was a life-time member of the Eagle Scouts. Eric graduated from WHS with the Class of 2003 and went on to earn his Associate’s Degree from UNH. After graduation he founded the APCO Landscape Supply Co. which he continued to manage until the time of his death. Eric was well known throughout the seacoast area and was always willing to help anyone in their time of need. He was a personal, polite, and energetic young man who did not like to sit still. Eric was always willing to coach, mentor and lend a hand to folks asking for assistance but in a humble way. He is and will be missed forever in our hearts. In addition to his mother, Eric is survived by his longtime girlfriend, Jan Tsoronis of Seabrook and his paternal grandmother, Gloria Merola of Hampton and St. Augustine, FL. He also leaves his aunts, uncles, cousins and many close friends and associates. Visiting hours will be from 2 to 5 pm on Sunday, February 21, 2016 in the Remick & Gendron Funeral Home – Crematory, 811 Lafayette Rd., Hampton. Services will be held at 11 am on Monday in the funeral home with burial to follow in the Oak Lawn Cemetery, Hampton Falls. Family and friends are respectfully invited. In lieu of flowers, memorial donations may be made to the Hampton Falls Volunteer Fire Department, 3 Drinkwater Rd., Hampton Falls, NH 03844

Seabrook &#8211; Eric Thomas Tatarinowicz, 30, of Seabrook and a former longtime resident of Hampton Falls, died suddenly on Monday, February 15, 2016 from injuries sustained in a snowmobile accident in Pittsburg, NH. He was born in Manchester,... View Obituary & Service Information

The family of Eric T. Tatarinowicz created this Life Tributes page to make it easy to share your memories.

Seabrook – Eric Thomas Tatarinowicz, 30, of Seabrook and a former...

Send flowers to the Tatarinowicz family.