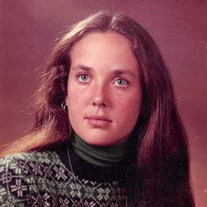 Providence, RI - Erin P. Carey, 53, died unexpectedly at her home, Saturday, November 25, 2017. She was born in Lawrence, MA May 15, 1964, the middle of five children to Paul and Maureen Carey. Having spent her entire childhood on Seabrook Beach, NH she attended Seabrook Elementary, Sacred Heart School and Winnacunnet High School in Hampton, NH graduating a year early in 1981 before earning a Bachelor of Science in Business from Plymouth State College in 1987. Erin was an avid skier and spent several years after college living and working in Breckinridge, CO, teaching young kids how to ski during the day and testing her limits on the slalom race course in her time off. Afterwards, she entered the world of corporate sales and spent nearly 25 years successfully selling software and hardware for a number of firms including starting her own company in the early 2000s. Erin is survived and mourned by her mother Maureen Carey of Seabrook Beach, her father Paul Carey of Ocala, FL, her three brothers, Darren Carey of Seabrook Beach, Chip Carey and his wife Tina of North Hampton, NH, Patrick Carey and his husband Christopher Sturr of Greenland, NH, her niece Logan Carey of Palm Springs, CA and nephew Hunter Carey of North Hampton, NH. She was predeceased by her youngest brother Brian Carey, who passed in November of 1995. Visiting hours will be from 4-7 P.M. Friday, December 1, 2017 at the Remick & Gendron Funeral Home-Crematory, 811 Lafayette Road, Hampton, NH. A mass of Christian burial will be celebrated at 10A.M. Saturday, December 2, 2017 at St. Elizabeth of Hungary Mission Church, 1 Lowell Street, Seabrook Beach, NH. Friends are respectfully invited. Burial will follow in the High Street Cemetery, Hampton. Erin was an unabashed and life-long dog lover. In lieu of flowers, memorial donations may be made in Erin's name to the New Hampshire SPCA, PO Box 196, Stratham, NH 03885.

Providence, RI - Erin P. Carey, 53, died unexpectedly at her home, Saturday, November 25, 2017. She was born in Lawrence, MA May 15, 1964, the middle of five children to Paul and Maureen Carey. Having spent her entire childhood on Seabrook... View Obituary & Service Information

The family of Erin P. Carey created this Life Tributes page to make it easy to share your memories.

Send flowers to the Carey family.