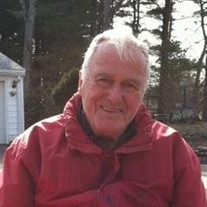 Greenland – Erlon James Gill, 87, of Greenland, passed away peacefully on Monday, July 24, 2017 at Maine Veterans’ Home in Scarborough, ME. He was born on April 20, 1930 in Dixfield, ME, a son of the late Erlon R. and Alice (Tibbitts) Gill. Raised in Dixfield, he graduated from Dixfield High School with the Class of 1948, and later received two master degrees in local and government management. Erlon proudly served 8 years in the Navy and 22 years in the Air Force during both the Korean and Vietnam War, reaching the rank of Chief Master Sergeant. After his time in the service, he worked in civil service for a number of years before retiring. Although he appreciated everything he worked hard for in life, his greatest treasures were his wife and children. He shared 47 loving years of marriage with his late wife Doris A (Corvese) Gill, who passed away in 2003. Erlon was an avid beekeeper who enjoyed sharing his knowledge and passion with others. He loved the outdoors, including hunting, fishing, trapping, gardening and his late father’s hunting camp in Carthage, Maine. Erlon was a confident, straight forward person, who liked to tease and have fun. He was endlessly busy, often creating things out of items others would find of little value. He is survived by his family including his children and their spouses: David Gill, Cathy Gill & Janine Moreau, Michael and Kate Gill, Susan Gill & Darren Scott and his grandchildren Christina and James Gill and Trevon, Tyrone & Tianna Scott. In addition to his parents and wife, he was predeceased by his brother Ronald. A graveside service will be held at 10 AM on Saturday, July 29, 2017 in the Calvary Cemetery, Portsmouth. Relatives and friends are respectfully invited. In lieu of flowers, donations may be made to Maine Veterans’ Home in Scarborough, ME - Unit A.

The family of Erlon J. Gill created this Life Tributes page to make it easy to share your memories.

Send flowers to the Gill family.