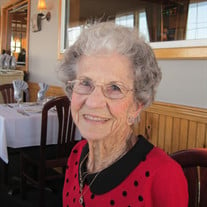 Hampton – Ernesta L. Lessard, 92, of Hampton, died Monday, September 19, 2016 at the Portsmouth Regional Hospital after a brief illness. She was surrounded by her loving and devoted family. She was born January 22, 1924 in Plaistow, a daughter of the late Allen and Stella (Ross) Walker. Ernesta was raised in Fremont and attended Robinson Female Seminary in Exeter. She married shortly after leaving school and raised her family in Portsmouth and Rye before settling in North Hampton in 1956. In 1973, Ernesta relocated to Hampton and was a faithful parishioner at the Hampton United Methodist Church and a member of the Orient Chapter, Order of Eastern Star #22 of Exeter. She went on to earn her LPN Certificate from Portsmouth Technical Institute in the early 1960s. A hard-working woman, Ernesta had been employed at the Exeter Hospital, the Court Street Extension in Exeter, as a private duty caregiver and as a childcare provider. Ahead of her time, Ernesta practiced Yoga and was a certified Yogi. In her later years, she worked the coffee counter for her daughter, Barbara Royal and her husband, Larry at Beverages Unlimited on Hampton Beach. Ernesta is survived by her daughter Barbara Royal and her husband, Larry of Hampton, her grandchildren, Rhonda Giandomenico and her husband, Mark of Hampton and Lorre Royal of Danville, her brother, Glenn Walker and his wife, Natalie of Exeter and her sister, Phyllis Dickinson of Boynton Beach, FL. She also leaves her great grandchildren, Stephanie, Craig and Scott Gardiner and Aerille Royal and her great great granddaughter, Rowan Gardiner. In addition to her parents, Ernesta was predeceased by her brother Byron Walker. Visiting hours will be from 12 to 2 pm on Sunday, September 25, 2016 in the Remick & Gendron Funeral Home – Crematory, 811 Lafayette Rd., Hampton. A service will follow the visitation starting at 2 pm in the funeral home. Family and friends are respectfully invited. Burial will be private. Flowers will be accepted but if desired, memorial donations may be mailed to the Hospice Help Foundation, 155 Fleet St., Portsmouth, NH 03801 or made online at www.hhelpfoundation.org.

Hampton &#8211; Ernesta L. Lessard, 92, of Hampton, died Monday, September 19, 2016 at the Portsmouth Regional Hospital after a brief illness. She was surrounded by her loving and devoted family. She was born January 22, 1924 in Plaistow, a... View Obituary & Service Information

The family of Ernesta L. Lessard created this Life Tributes page to make it easy to share your memories.