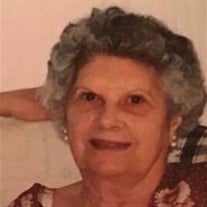 Seabrook – Ethel R. (Durant) Small, 102, of Seabrook, passed away peacefully at the Oceanside Center Nursing Home in Hampton on Friday, January 3, 2020. She was born in Salisbury, MA on December 28, 1917 the daughter of the late Clinton and Lena (Hamel) Durant and attended Hampton Academy. After graduating, she settled into the town of Seabrook where she married her late husband Reginald (Reggie) W. Small and went on to raise four children. She spent her entire life in Seabrook as a homemaker and landlord for the numerous properties that she and Reggie owned on the aptly named street, still known to this day as Smalls Avenue. Ethel was a robust and virtuous woman who spent many years of her life tending to the needs of family, friends and tenants on Smalls Avenue. Although Ethel and Reggie traveled extensively throughout greater New England, she was lovingly remembered, as well, for the large family clambakes she hosted on Smalls Avenue. These gatherings were often attended by many of the families of her ten siblings. She is survived by her son Reginald (Sonny) Small, Jr. of Seabrook, who was also her dedicated caregiver and companion during her later stage of life. Her daughter, Arlene Perfect who lives in Reynoldsburg, OH did visit often. Ethel was predeceased by her husband, Reggie, in 1974; two sons, John (Jack) Durant and Dennis Small, Sr. She is survived by two brothers, Arthur “Jim” Durant of Hampton and Robert Durant of Hampton Falls; two sisters, Mildred Cote of Dover and June Chase of Manchester; six grandchildren, Randall Durant of Hampton, Dennis Small, Jr. of Seabrook, and Karen Marvin, Sharon Mayes, Robert Webb, and Donald Webb, Jr., all residing in Ohio. Ethel also leaves behind seven great grandchildren and numerous nieces and nephews. In addition to her parents, husband and sons, she was predeceased by her brothers, Russell, Hollis, Walter and Richard Durant and sisters, Gertrude Marston Brown, Grace Brown and Martha Janvrin. Ethel’s family would like to thank the staff at Oceanside Center for their loving devotion and care. Visiting hours will be held from 4 – 6 PM on Wednesday, January 8, 2020 in the Remick & Gendron Funeral Home – Crematory, 811 Lafayette Rd., Hampton. Services will be held at 11 AM on Thursday, January 9, 2020 in the funeral home. Burial will be in Hillside Cemetery, Seabrook. Relatives and friends are respectfully invited.

Seabrook &#8211; Ethel R. (Durant) Small, 102, of Seabrook, passed away peacefully at the Oceanside Center Nursing Home in Hampton on Friday, January 3, 2020. She was born in Salisbury, MA on December 28, 1917 the daughter of the late Clinton... View Obituary & Service Information

The family of Ethel R. Small created this Life Tributes page to make it easy to share your memories.

Send flowers to the Small family.