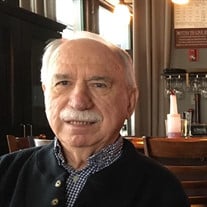 Hampton – Eugene E. Buckmore, 85, of Hampton, passed away peacefully on Monday, February 14, 2022 after a brief illness. Gene was born in Hallowell, ME on September 15, 1936, the only son of the late Edward L. and Julia (Quintal) Buckmore. He and his late wife, Gloria (Caouette) Buckmore, shared 60 years of beautiful marriage together before her passing in 2019. He leaves his sister, Marlene Rodrigue and husband Paul, his children, Celeste Buckmore, Hampton, Cheryl Riley, Derry, NH, Stephen Buckmore, Tucson AZ and David Buckmore and his wife Doreen of Centralia, IL, as well as, his beloved grandchildren, Hunter Buckmore, Michael Buckmore, Lindsey Buckmore, Liam Riley and Shannon Riley. He is predeceased by his grandchild, Meaghan Riley and his son in law, David Currier. Gene was raised in Auburn, ME and graduated from Edward Little High. While in high school, he met his beloved Gloria and they were married in 1959, just as Gene was being sent to Wiesbaden, Germany with the United States Air Force. They traveled all over Germany and enjoyed their hospitality. Gene earned his Bachelor’s Degree in Education from the University of Maine, Orono Campus. He always wanted to teach and began his career with Valley High School in Bingham, ME. The Buckmore family moved to Hampton in 1967 when Gene took a position teaching math at Exeter High School. Over a 3-year period he would drive the family to Fort Collins, Colorado taking a different route each year to see the United States, as Gene earned his Master’s Degree. He was subsequently hired to teach math at Winnacunnet High School in the 1980’s where he remained until his retirement in 2001. He found teaching again at Great Bay Community College and worked as a toll taker in Hampton, for several more years. He loved teaching and supporting his students during their time in high school and was a fixture in the bleachers, cheering them on, for so many different events. Gene was also known and loved as a bartender with Lamie’s, T.J. Patrick’s, Ron’s Beach House and Ron’s Landing where he made many friends who enjoyed his fantastic sense of humor and his comedic storytelling. Most importantly, Gene loved his family. He was a hardworking man and did what was necessary so his beloved Gloria could stay at home raising their kids. Services will be private. In lieu of flowers, the family suggests memorial donations to the Trinity Church Food Pantry, 200 High St., Hampton, NH 03842 or to a charity of one’s choosing.

Hampton &#8211; Eugene E. Buckmore, 85, of Hampton, passed away peacefully on Monday, February 14, 2022 after a brief illness. Gene was born in Hallowell, ME on September 15, 1936, the only son of the late Edward L. and Julia (Quintal) Buckmore.... View Obituary & Service Information

The family of Eugene E. Buckmore created this Life Tributes page to make it easy to share your memories.

Send flowers to the Buckmore family.