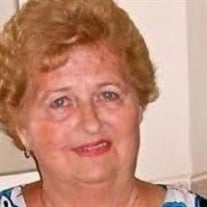 Hudson, NH – Evelyn M. (McNeil) Babinski Flynn, 88, of Hudson and formerly Norwood, MA and Nashua, NH, passed away peacefully on Friday, June 18, 2021. She was born in Norwood, MA on July 23, 1932, a daughter of the late Sylvester and Lillian (Strahan) McNeill. Evelyn was raised in Norwood and graduated from Norwood High with the Class of 1951. She married her first husband and father of her children, Stanley Babinski, and they relocated to Nashua in 1964 to raise their family. Evelyn was a stay-at-home Mom but also served her community as a member of the Nashua Lions Club and Hudson Women’s Club. Stanley passed in 1981 and she married her second husband, Philip Flynn in 1992. She is survived by her sons, Paul Babinski and David Babinski and his wife, Clara of Kentucky, her daughter, Dr. Karen Richards and her husband, Robert Hunt of Ft. Myers Beach, FL, her brother, Gerry McNeil and his wife, Caroline of Mansfield, MA and her sister, Judy Guisti and her husband, Dick of Walpole, MA. She also leaves many grandchildren, great grandchildren, nieces and nephews. In addition to her husbands, Stanley and Phil, Evelyn was predeceased by her brother, Sylvester McNeil and her sisters, Elizabeth DiOrio and Lillian Lynch. A Lions Club member for 30 years, she began as a member of the Nottingham West Lions, later transferring to Nashua. A Melvin Jones Fellow, Evelyn served District 44-H as First Lady in 2008-2009. The Lions Bunkhouse at Camp Pride was rededicated to the Flynn’s during Nashua’s 90th anniversary. Services will be private.

The family of Evelyn M. Flynn created this Life Tributes page to make it easy to share your memories.

Send flowers to the Flynn family.