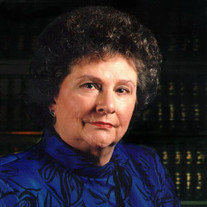 Rye – Evelyn Mae “Linda” Quinn, 95, a most beloved wife and mother to ten children has reunited with her husband in the house of the Lord and Savior they served for 74 years of married life. Evelyn Mae “Linda” Quinn, recently of Langdon Place in Dover, NH, died peaceably on July 4, 2017 after an extended period of disability. She was the first of three daughters born to Halbert and Helen (Snow) Dow in Methuen, MA on November 27, 1921. Linda was a graduate of Andover High School and the Chamberlain School of Retailing in Boston. She married George Francis Quinn of Lawrence, MA, son of Frank J. and Genevieve A. (McDermott) Quinn, on October 31, 1942 before being swept up in the war years and her (not insignificant) role in what would later be known as the baby boom. Linda’s Catholicism and pursuit of all that might deepen her faith played a prominent role in her life. She and George were active and supportive parishioners wherever they lived. Despite the demands of raising a large family, Linda was a voracious reader, an accomplished pianist, a proficient cook, and an extremely informed and capable woman able to manage a large household with aplomb. She had deep appreciation for the arts complimented by her innate style, poise, and grace - all achieved without pretension. Her unrelenting efforts to convey faith and values to her children had a profound effect in overwhelmingly positive and unexpected ways. Her ten children and 25 grandchildren are a testament to the ripple effect of such dedication. Linda loved to be social and had many friends who appreciated her conversation, interests, and talents. Her skills became especially valuable when she and George became active leaders in Marriage Encounter, where they had significant impact and many treasured friendships. Linda could appreciate an opera, a musical, a crossword puzzle, or a hand of Bridge as enthusiastically as a trip to Europe. She had a joy that comes of appreciating, and generously sharing, all the good that life has to offer. Is it any wonder that she is so thoroughly missed? Linda Quinn was predeceased by her husband, George on November 7, 2016. She is survived by the following children/spouses who loved and appreciated her so very much: Kathleen Quinn Wild of Brookfield, MA, David & Betsy Quinn of Frederick, MD, Jeffrey Quinn of Rye, NH, Terry & Doris Quinn of Emmitsburg, MD, Mark & Mary Ellen Quinn of Pleasanton, CA, Lisa Jackson of Walkersville, MD, M. Janine Quinn & David Frolio of Rye, NH, Marcia Quinn of Newport, RI, F. Maureen Quinn of Deerfield, NH and Michael & Sara Quinn of Rye, NH. A Mass of Christian burial will be celebrated at 10:30 AM on Thursday, July 13, 2017 at St. Theresa Parish, 815 Central Rd., Rye Beach, NH. Burial will follow in the Central Cemetery, Rye. In lieu of flowers, donations in Linda’s name may be made to: The Michael Quinn Scholarship Endowment, Red Cloud Indian School, Advancement Office, 100 Mission Dr., Pine Ridge, SD 57770 www.redcloudschool.org.

The family of Evelyn M. "Linda" Quinn created this Life Tributes page to make it easy to share your memories.

Send flowers to the Quinn family.