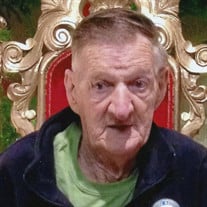 Seabrook, NH – Everett W. Sielicki, 85, of Seabrook, died peacefully on Thursday, November 17, 2016 at his home, surrounded by loving family. He was born May 31, 1931in Newburyport, MA a son of the late Michael J. and Agnes (Early) Sielicki. Everett was raised in Newburyport. After his marriage to his beloved wife, Sarah E. (Eaton) Sielicki, he moved to Seabrook where he has lived for the past 38 years. Everett enjoyed playing cards and going to yard sales with Sarah but his biggest joy was the time with his family including his many grandchildren who loved their “Papa” dearly. In addition to his wife, Sarah, Everett is survived by his children, Kim Contarino of Seabrook, Holly Estes of Big Pine Key, FL, Jolene Eaton of Green Valley, AZ, Andrea Dow of Seabrook, Everett Sielicki, Jr. of Norfolk, MA, Danny Sielicki of Kingston, Mike Sielicki of Salisbury, MA, Mark Sielicki of Seabrook and Stephen Jordan of Green Valley, AZ, Cheryl West of Kentucky, Marilyn Cynewski of Plaistow, Herbert Millette of Seabrook and Ronald Welch, Jr. of Seabrook; his siblings, Lambert Sielicki and Kay Bealieu both of Newburyport, MA, and Carol Welch of Seabrook, his loyal canine friend Bubba many grandchildren, great grandchildren and many nieces and nephews. He was predeceased by his brothers, Hank Brown and Robert Sielicki, his sister, Edwina Hunt and his daughter, Charlene Frost. Visiting hours will be held from 6 to 8 PM on Tuesday, November 22, 2016 at the Remick & Gendron Funeral Home-Crematory, 811 Lafayette Road, Hampton. Services will be held at 11 AM on Wednesday, November 23, 2016 in the funeral home with burial to follow in the Wildwood Cemetery, Seabrook. Family, friends and associates are respectfully invited.

The family of Everett W. Sielicki created this Life Tributes page to make it easy to share your memories.

Send flowers to the Sielicki family.