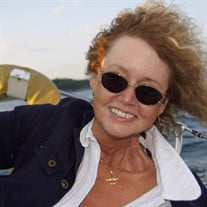 Port Orange, FL - Everette Caton “Peach” Gazda died on June 16, 2018 and she is not at all happy about it. Hers was not an ordinary life and she didn’t go willingly. She was born on January 21, 1948 in Oak Park, IL and raised in California before moving to Saigon with her parents during the Vietnam War. After three years in Saigon, she and her parents moved to Bangkok where she met her husband, Richard, a pilot in the Air Force. Nearly three years in Thailand and Peach moved back to the states to be with Richard. She was married to Richard in Oakland, CA on January 1, 1972. Their daughter Stefanie was born on December 22, 1977 and they settled in Rye, NH where they lived for the next 30 years where they operated Whippoorwill Farm. Peach graduated from Blackford High School in San Jose, CA in 1965. Her education was not traditional. She studied at the University of California, Santa Cruz before moving overseas and received her Bachelor of Arts in English from the University of New Hampshire in 2000. She received her Master of Fine Arts in Creative Nonfiction Writing from Vermont College of Norwich University in 2003. She was a prolific painter, writer, and an unapologetic liberal. She is survived by her husband Richard Gazda of Port Orange, FL; her daughter Stefanie Gazda, son-in-law Jeffrey Holcomb, and granddaughter Audrey Holcomb of Newberry, FL; her sister Judy Hana and brother-in-law Hank McLaughlin of Lakeport, CA; her sister-in-law Susan Caton of Vancouver, WA and her three children and their families; her sister-in-law Arlene Walker of Venice, FL and her two children and their families. A Liturgy of the Word will be celebrated at 10 AM on Saturday, July 14, 2018 at St Theresa Parish, 815 Central Rd., Rye Beach NH. Burial will be in the Central Cemetery, Rye, NH. A reception will follow in the St. Theresa Parish Hall. In lieu of flowers, memorial contributions may be made to the Cedar Key Dolphin Project (www.cedarkeydolphinproject.org). Donations will go towards offering research experiences for non-traditional students.

The family of Everette C. "Peach" Gazda created this Life Tributes page to make it easy to share your memories.

Send flowers to the Gazda family.