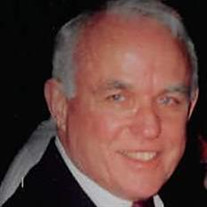 Hampton - Frederick Curtis Johnston passed away peacefully on May 8, 2019 at the age of 87 in Rye. He resided in Hampton, since 1986 and previously lived in New London, NH and Rumford, RI. Curtis is survived by his wife of 16 years, Alison; her daughter Heather (Chris); his children David (Heidi), Gregory (Mary), Sarah Jane (Mike) and Matthew (Julie); his stepchildren Mark (Dee), Diane (Wayne) and Steven; his sister Elaine (Al); his six grandchildren KC (Kristen), Bailey, Sam, Gwen, Zach and Maggie; and many cherished nephews, nieces, cousins, in-laws, and friends. He is predeceased by his wife of 22 years, Grace (Daly) who passed away in 2000, and the mother of his children, Ann (Bailey) who passed away in 2005. Curtis was born November 25, 1931 to Frederick and Marion (Curtis) Johnston in Providence, RI. He graduated from Cranston High School and received his BS in Economics from the University of Rhode Island in 1954. While at URI he was a member and President of Theta Chi fraternity. He joined the ROTC and served over 30 years in the US Army Reserves retiring as Colonel in 1984. His professional career encompassed 35 years in computer sales and banking with IBM, Burroughs, FDSi, TRW, and State Street. Curtis was a parishioner of Grace Episcopal Church in Providence and served as Senior Warden from 1977-1980. His favorite job was his first; working as a farmhand during the summers of 1941-1945 in Sunapee, NH. This began his passion for the agrarian history of farming. Curtis was an avid collector of antique farm tools. His vegetable garden, raspberry patch and beautiful green lawn were also favorite hobbies. He was a devoted member of the NH Farm Museum since 1985 where he was a volunteer, board member, President, and Trustee. Curtis was at home in the mountains; as a member of the Appalachian Mountain Club he summited all the 4,000 footers of New England. He loved sports and history and had a deep interest in reading biographies. Curtis was a proud first-generation American; his father emigrated from Northern Ireland in the early 1900’s. He enjoyed sharing his Scottish heritage with others and would sport his kilt “Grampy’s skirt” on special occasions. He was a charming extrovert who loved engaging strangers in conversation. He was incredibly proud of his entire family and all their accomplishments. His twinkly blue eyes and straightforward approach to life will be in our memories always. The family extends gratitude to the wonderful staff at Webster-at-Rye, Brookhaven Hospice of NH, and Seniors Helping Seniors for their kind and compassionate care of Curtis. He will be dearly missed by all who knew and loved him. Visiting hours will be from 5-7 P.M. Tuesday, May 14, 2019 at the Remick & Gendron Funeral Home-Crematory, 811 Lafayette Road, Hampton. Services will be held at 11 A.M. Wednesday, May 15, 2019 in the funeral home with a reception to follow. Burial is private. In lieu of flowers, donations in memory of Curtis may be made to the NH Farm Museum, 1305 White Mountain Highway, Milton, NH 03851.

Hampton - Frederick Curtis Johnston passed away peacefully on May 8, 2019 at the age of 87 in Rye. He resided in Hampton, since 1986 and previously lived in New London, NH and Rumford, RI. Curtis is survived by his wife of 16 years, Alison;... View Obituary & Service Information

The family of F. Curtis Johnston created this Life Tributes page to make it easy to share your memories.

Send flowers to the Johnston family.