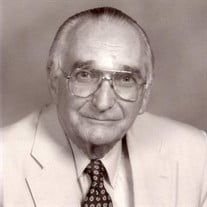 Exeter – Ferdinand Beaudry “Ferd” Ensinger, 93, of Exeter and formerly of North Hampton, died on Thursday, January 21, 2016 at the Exeter Hospital after a period of failing health. Ferd was born in New Rochelle, New York, on September 27, 1922, the son of the late Ferdinand B. and Florence (Herrington) Ensinger. While attending Middlebury College in Vermont, Ferd was a member of the Army enlisted reserve. He entered the active duty Army ground forces during WWII and served his country honorably until his discharge in 1944. After the war, he returned to Middlebury College and completed his degree. Ferd met the love of his life, the late Mary (Meade) Ensinger and they were married on October 2, 1948 at the North Avenue Presbyterian Church in New Rochelle, NY. Ferd and Mary cherished each other and were inseparable as they shared over 65 years together until Mary’s death in 2014. In his early years, Ferd served as Executive Director of the National Office of Kappa Delta Rho Fraternity; Sales Vice President, Security Mutual Life Insurance Company of New York; Instructor and Seminar Leader at Boston University, UNH and Northeastern. He went on to a distinguished career as a member of the consulting group of The Bigelow Company which he joined as a partner in 1980 and where he served as Chairman in 1991. Ferd published a number of articles on building organizational distinction, including Why Mergers Fail, Management by 'Culture or Cooler', Mission Without a Cause, Managing Uncertainty, Following the Legend and The Implementation Gap. A prominent public speaker, Ferd had a national reputation in the business and education communities for his keynote addresses. Upon hearing of Ferd’s death, longtime friend and business associate, Pat Sullivan, wrote, “No one could dispute that Ferd played a role in the 1986 appearance of the Patriots in Super Bowl XX. His consultancy led to a series of changes in how the Patriots dealt with their players, coaches, and even fans that added to that successful season.” In addition to his parents and his beloved Mary, Ferd was predeceased by his twin brother, Lewis G. Ensinger who died in 2005. Ferd is survived by his nieces; Lynne Ensinger of Hartsville, NY, Lori Kuebler of Katonah, NY and Carol Manning of Lawrence, KS. He also leaves Mary’s nieces and nephews; Michael Hutson of Cypress, TX, Rik Hutson of Houston, TX, Wendy Corder of Double Oak, TX, Margaret Klander of Carlsbad, CA, Patricia Barboni of Laguna Niguel, CA and Harry Hutson of Keaau, HI. Ferd will always be remembered for his enthusiastic and positive attitude, his friendly smile and his ability to make a difference in people’s professional and personal lives. He will be sadly missed by his family and his many dear friends and business associates. A Celebration of Life Service for Ferd and Mary will be held at 10 am on Saturday, May 21, 2016 at the United Church of Christ, 295 Atlantic Ave., North Hampton. A reception will follow the service in the church hall and Ferd and Mary will be buried together in the Center Cemetery, North Hampton immediately following the reception. If desired, memorial donations may be made to the United Church of Christ at the above address.

The family of Ferdinand B. Ensinger created this Life Tributes page to make it easy to share your memories.

Send flowers to the Ensinger family.