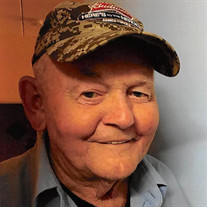 Exeter – Floyd F. Marston, 85, of Exeter and a former longtime resident of North Hampton, passed away on Wednesday, October 23, 2019 at the Rockingham County Home where he had been living as his health declined. Floyd was born in North Hampton on March 25, 1934, one of 13 children, of the late Clarence D. and Doris (Woodburn) Marston. Floyd was raised in North Hampton and being a farmer at heart, he worked the former Leavitt Farm in North Hampton for many years. As a young man, Floyd proudly served his country with 1st Armored Division of the United States Army. After his honorable discharge form the service, Floyd moved to Seabrook with his family and worked as a machinist with Bailey Corporation. He then moved to Brentwood and went to work for Sally and Jimmy Lufkin at Modern Machine. He eventually retired and moved to the Water Street Apartments in Exeter. Floyd made many friends at the apartments and was a regular at Trackside Restaurant in Exeter, he will be sadly missed. He is survived by his sons, Eugene “Ed” Marston and his wife Patricia of Seabrook and Floyd Marston, Jr., and his companion Vickie of Franklin, his daughter, April Rose Marston of Exeter, his sisters, Brenda Carter, Dorothea “Dolly” Silver and Shirley Whenal and his brothers, Ralph and Keith Marston. He also leaves his grandchildren, Joseph Prisby and Zayna Marston and his great grandchildren, Shawn Michael Perkins and Owen Danley. Floyd was predeceased by his sisters, Rosemary Verno, Gloria Hanley, , Lucille Washburn and Judith Smith, his brothers, Walter, George, Richard and Dennett Marston and his granddaughter, Jasmine Rose Marston. A graveside service will be held at 11 AM on Saturday, November 2, 2019 in the Center Cemetery on Post Rd. in North Hampton. Relatives and friends are respectfully invited. In lieu of flowers, donations may be made to the American Cancer Society PO Box 22478 Oklahoma City, OK 73123.

Exeter &#8211; Floyd F. Marston, 85, of Exeter and a former longtime resident of North Hampton, passed away on Wednesday, October 23, 2019 at the Rockingham County Home where he had been living as his health declined. Floyd was born in North... View Obituary & Service Information

The family of Floyd F. Marston created this Life Tributes page to make it easy to share your memories.