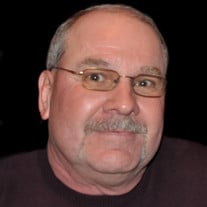 North Hampton - Floyd “Gus” George Perkins Jr., 63, of North Hampton, passed away unexpectedly at his home on Sunday, November 5, 2017. He was born April 20, 1954 in Portsmouth, a son of the late Floyd G. and Beulah E. (Flairday) Perkins. Raised in Rye, he graduated from Portsmouth High School. For the past 24 years he was the owner/operator of Seacoast Pools, a family business started by his brother Fred in 1972. His son Chip worked with him from a young age and has continued to work in the business ever since. His mother, Beulah also worked at the pool store on Route 1 in Rye for many years before its closing. Gus enjoyed snowmobiling and was an avid race fan; he particularly enjoyed attending drag racing events with his son. He is survived by his son Chip, daughter-in-law Melissa and cherished grandson Coleman Perkins all of Nottingham; brothers, Jim Perkins of Okeechobee, FL, John Perkins and his wife Ruby of Moultonborough; sister, Cindy Lawrence and her husband Steve of Newmarket and Gus’s former wife, Deborah Lynch of Kittery Point, ME. In addition to his parents, he was predeceased by his brother, Fred Perkins in 1993, as well as his beloved Dachshunds; both named Charlie in 2002 and 2017. Visiting hours will be held from 5 -7 PM on Monday, November 13, 2017 at the Remick & Gendron Funeral Home-Crematory, 811 Lafayette Road, Hampton. Relatives and friends are respectfully invited. Burial will be private. In lieu of flowers, donations may be made to the New Hampshire SPCA, 104 Portsmouth Avenue, Stratham, NH 03885 or online at www.nhspca.org.

The family of Floyd "Gus" Perkins Jr. created this Life Tributes page to make it easy to share your memories.