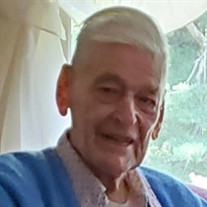 Seabrook – Forrest S. Felch, 97, of Seabrook, died Wednesday, September 1, 2021 at his home after a period of failing health. He was born October 2, 1923 in Newburyport, MA a son of the late Ralph and Viola (Hersey) Felch. He attended Seabrook elementary schools and Newburyport High School graduating with the Class of 1941. He was a veteran of WW II serving with the US Navy as a 1st Class Baker. A carpenter by trade he built many houses in the area for many years. He was also employed by the NH Liquor Commission for seven years and retired from General Electric in Lynn, MA after fifteen years of service. He was a long time member of Trinity United Church, a member of Star in the East Lodge #59 F & AM of Exeter for over 50 years, Scottish Rite Bodies Valley of Portsmouth & Dover, NH Consistory 32nd degree, East Gate Masonic Club and a member of the Silver Circle Hunting Club. Forrest used to cut up turkeys for the church harvest suppers for many years. He enjoyed seeing his friends there, especially his classmates that came to the suppers year after year. He shared 71 years of marriage with his wife the late Christine (Thompson) Felch who predeceased him in 2020. Family members include his son Dana F. Felch and his wife Julie, daughter Diana L. Leguillon and her husband Mark, his six grandchildren; Kelley Dwyer, Jessie Nudd, Ory Felch, Alex Felch, Justin Felch and Ryan Murphy and two great-grandchildren, Jordan Untiet and Katherine Dwyer. In addition to his wife and parents he was predeceased by his daughter, Deborah Murphy and his brother William Felch. A private graveside service will be held in the Elmwood Cemetery, Seabrook. In lieu of flowers donations may be made to Trinity United Church, 103 Lafayette Road, Seabrook, NH 03874 or Wounded Warrior Project, P.O. Box 758516, Topeka, Kansas 66675-8516. Arrangements were by the Remick & Gendron Funeral Home-Crematory, Hampton.

Seabrook &#8211; Forrest S. Felch, 97, of Seabrook, died Wednesday, September 1, 2021 at his home after a period of failing health. He was born October 2, 1923 in Newburyport, MA a son of the late Ralph and Viola (Hersey) Felch. He attended... View Obituary & Service Information

The family of Forrest S. Felch created this Life Tributes page to make it easy to share your memories.