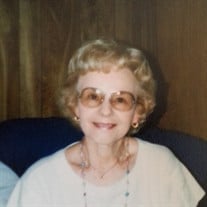 North Hampton – Frances B. “Franny” Winch, 89, of North Hampton, died peacefully, April 20, 2017 with family by her side. She was born in Exeter, October 11, 1927 the daughter of the late Cedric and Bertha (Robinson) Dustin. She shared 64 years of marriage with her late husband, Wallace Winch who predeceased her along with her daughter Janice Winch. A lifelong resident of North Hampton she attended local schools and graduated from Hampton Academy, later graduating hairdressing school top of her class. She worked as a hairdresser and in the local community for many years. A lifelong member and former secretary of the United Church of Christ for 17 years, member of the Ladies Union, North Hampton Historical Society, and vice president of the Duston–Dustin Garrison House being a descendent. She proudly served as a missionary for a month with the church in Africa at age 75, she was a very giving person helping people in many ways. Family members include her son, Steven Winch of Lynchburg, VA, her daughters, Nancy Carr of Barrington, Deanna Winch of Milton, her brother, Cedric Dustin, Jr. of Bow, four grandchildren, Megan, Amber, Tony and Stacey, four great grandchildren, Tristen, Thaedin, Lilly and Alethea, nieces, nephews, along with so many beloved friends especially her lifelong friend Jean Booker. A celebration of life service will be held at 1:30 P.M. Saturday, May 6, 2017 at the United Church of Christ, 295 Atlantic Avenue, North Hampton. Relatives and friends are respectfully invited. In lieu of flowers donations may be made to Outdoors Again, 661 Main Street, Waterboro, ME 04087 or go to www.outdoorsagain.org/donate.html. Arrangements are by the Remick & Gendron Funeral Home-Crematory, Hampton.

The family of Frances B. Winch created this Life Tributes page to make it easy to share your memories.