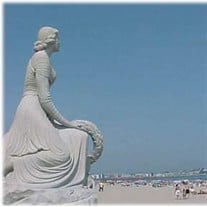 Hampton – Francis K. Bajowski, Sr., 94, of Hampton, passed away peacefully at his home on Wednesday, October 4, 2017. Frank was born on April 27, 1923 in Holyoke, MA, a son of the late John and Mary (Lenard) Bajowski. Frank and his late wife, Agennea, had resided in Hampton since 1963 coming from Malden, MA when Frank was assigned as the Officer-in-Charge of the Coast Guard Station at North Beach. He spent 22 & ½ years in the Coast Guard and retired as a Master Chief Petty Officer in 1966. He went to work for Sears Department Stores as a Service Advisor and retired after 20 years with the company. Family members include his two sons, Francis K. Bajowski, Jr. and his wife Janet of Hampton and John M. Bajowski and his wife Joni of Wasilla, AK, his daughter, Donna Marie Foster and her husband Jeffrey of Providence, RI, five surviving grandchildren and nine great grandchildren. He was predeceased by Agennea, his wife of over 60 years, who died in 2012. Private services will be held at the NH State Veterans Cemetery in Boscawen, NH. In lieu of flowers, the family suggests donations in Frank’s name to the American Heart Association, 20 Speen Street, Framingham, MA 01701.

The family of Francis K. Bajowski Sr. created this Life Tributes page to make it easy to share your memories.

Send flowers to the Bajowski family.