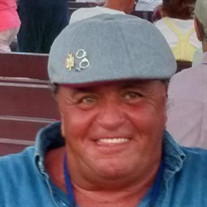 Hampton, NH – Francis K. “Buddy” Beckwith, III, 64, of Hampton, formerly of Sutton, Mass., died, December 2, 2015 after a sudden illness. He was born in Worcester, Mass., July 11, 1951 the son of the late Francis K. and Beatrice (Alexander) Beckwith, II. He was raised in Shrewsbury, Mass. He was employed as a police officer for the City of Worcester in the motorcycle division retiring in 1982. Buddy then took his love and hobby of cooking to begin a career in food services and later served as the manager at Job Corps in Grafton, Mass, as well as teaching culinary courses. He made his home in Hampton since 2003 and was a member of St. John’s Lodge A.F. & A.M. of Newburyport, Mass. He shared 35 years of marriage with his wife, Therese E. (Gagne) Beckwith of Hampton. In addition to his wife, he leaves five children, Francis K., IV of Worcester, Mass., Jacqueline Meninno of Marlborough, Mass., Jéan Paul of Hampton, Danielle Beckwith of Brookline, NH and Maria Gagne of Webster, Mass., five grandchildren, his sister, Linda Doyle of Clearwater, FL, as well as many nieces and nephews. In addition to his parents, he was predeceased by two sisters, Carol Ann Tracy and Lou Ann St. John. A Celebration of Life Service will be held at 12 Noon, Sunday, December 13, 2015 at the Oceanfront Pavilion Reception Room on Hampton Beach, Hampton, NH. Relatives and friends are respectfully invited. In lieu of flowers, donations may be made to St. John’s Lodge A.F. & A.M., 31 Green Street, Newburyport, MA 01950. Assistance with the arrangements was by the Remick & Gendron Funeral Home-Crematory, Hampton.

The family of Francis K. Beckwith III created this Life Tributes page to make it easy to share your memories.