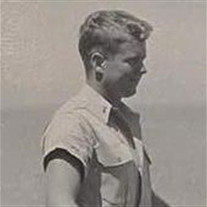 Exeter - Captain Francis J. "Frank" Kolb, 88, of Exeter and a former longtime resident of North Hampton, passed away on Monday, February 13, 2017. He was born in Methuen, MA on May 12, 1928, a son of the late Francis J. and Beulah (File) Kolb, Sr. Frank was raised in Methuen and graduated from Tenney High where he starred in football. While in Methuen, he met and married the love of his life and wife of over 61 years, Doreen "Dody" Garlick. After high school, Frank joined the Navy and flew the F6F Hellcat fighter. He left the Navy in 1951, was hired by TWA and retired in 1988 as a 747 captain. His entire family was with him on his final trip. Upon his retirement, Frank continued flying small planes and was always physically active. He was a marathon runner, a skier and a nationally recognized tennis player, ranked number one in New England for age 70 and over tennis players. Frank loved to travel and spend time with his family. He leaves behind his two sons, Captain Mark R. Kolb (Delta retired) and his wife, Tracey of East Wakefield and J Kolb and his wife Marci of St. Petersburg, FL and Annapolis, MD: his grandchildren, Molly Rose Kolb, Ryan Milgrim and Jay Randall Kolb: his nephew John Patrick and his niece Shereen Greenberg and her husband Dr. Richard Greenberg. Frank was predeceased by his beloved wife Dody, in 2013. A celebration of his life will be held at 4 PM on Saturday, February 18, 2017 at the Airport Cafe, 9A Lafayette Rd., North Hampton. In lieu of flowers, the family suggests donations to the Juvenile Diabetes Research Foundation at http://www.jdrf.org/ or to Autism Speaks at https://www.autismspeaks.org/ways-give.

The family of Capt. Francis J. Kolb Jr. created this Life Tributes page to make it easy to share your memories.

Send flowers to the Kolb family.