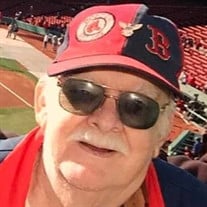 Seabrook, NH - Francis Michael “Mike” O’Connor, Sr., 81, of Seabrook, passed away on May 5, 2017 at his home. Francis was born and raised in Newburyport, MA to Francis E. and Alice (Boucher) O’Connor on July 24, 1935. He worked as an Auxiliary police officer for the city of Newburyport, and was a shoemaker for the Ruth Shoe Co. in Newburyport for many years. He also worked as a painter at O’Connor and Son Painters for 62 years. His hobbies included target shooting, archery, crafts of many kinds, and he loved to collect a various range of items. He loved to take pictures and always had his camera in-hand and ready for the next shot. He was also a huge Red Sox fan. Francis had a very kind heart and loved to just to sit and talk to people about everything and anything. In addition to his wife of 48 years, Mabel (Hersey) O’Connor he is survived by his children, Michelle Gamelin of Danville, Tammy Golden, Patricia O’Connor and Francis M. O’Connor Jr. and wife Kelley all of Salisbury, MA, Steven Crocker and wife Lisa of Exeter, Kellie O’Connor Brown, Linda Hale and husband Rick, Michael A. O’Connor and wife Kelly, Scot Crocker, Lawrence Crocker and wife Lisa all of Seabrook. Francis is also survived by his brothers, Albert and Gerald O’Connor and sisters, Lorraine O’Connor and Carol Nyberg. He leaves behind many grandchildren, great-grandchildren, nieces, nephews, cousins and many friends. Francis was preceded in death by his parents, infant son Michael Francis, grandson Michael Francis O'Connor and infant grandson Richard “Rickie” Sunman II. Calling hours will be at 11 AM Saturday May 20, 2017 at the Rand Memorial Church, 134 South Main Street, Seabrook with services and celebration of life to follow, refreshments will be available. In lieu of flowers, a memorial fund has been opened for his wife in her time of hardship. Contributions are greatly appreciated and may be made to Francis O'Connor Memorial Fund, c/o LeeAnn Wolcik, Newburyport Bank, 63 State Street, Newburyport, MA. 01950. Assistance with the arrangements was by the Remick & Gendron Funeral Home-Crematory, Hampton.

The family of Francis "Mike" O'Connor Sr. created this Life Tributes page to make it easy to share your memories.