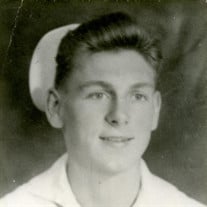 Seabrook - Frank Tilton Chase Jr., passed away at the age of 95 on April 16, 2021 after a period of failing health. Frank was surrounded by loved ones during his final hours. He was the son of Frank Sr. and Carrie (Janvrin) Chase and was a lifelong resident of Seabrook. He proudly chose to serve his country as a Navy seaman in WWII. Frank served on the USS Franklin (CV-13) aircraft carrier in multiple battles throughout the Pacific, and was onboard when it was hit by bombs and kamikaze planes costing the ship over 700 of its’ crew. For his actions during this final battle of the ship, he was awarded the Bronze Star. Frank was a merchant marine after the war, eventually working for over 20 years at the Portsmouth Naval Shipyard. He was a commercial fisherman during most of his life, having caught his last Bluefin tuna weighing 300 lbs. at the age of 91. In addition to fishing, Frank enjoyed hunting, spending time outfitting his boats, and gatherings with his family. One of Franks’ fondest memories was traveling to the WWII memorial in Washington D.C. on an Honor Flight with his grandson Frank whom he had a very special relationship. He was one of the longest standing members of the Raymond E. Walton American Legion Post #70. Frank was predeceased in 2012 by his beloved wife of 62 years Gloria (Dow) Chase, and is survived by his three children and their spouses; Peggy and her husband Eugene Welch and Frank W. and his wife Dianne Chase both of Seabrook, Charlotte and her husband Ralph Tapia of Wakefield NH, and 6 grandchildren, Eugene Welch, Michael Welch, Tia Watts, Traci Dorman, Frank Chase and Shelly Bitomske, 12 great grandchildren, his brother Francis Chase, his sisters Patricia Locke, Marlene Greenwood and Pamela Fryklund, several nieces and nephews. In addition to his wife and parents Frank was predeceased by four siblings; Elsie Chase, Bessie Anchors, Annie Chase and Donald Chase. Visiting hours will be from 2:30 – 4:30 P.M. Saturday, April 24, 2021 at the Remick & Gendron Funeral Home-Crematory, 811 Lafayette Road, Hampton. Services will be private. A graveside memorial will be held at a later date. Donations may be made to the National Kidney Foundation or the charity of your choice.

Seabrook - Frank Tilton Chase Jr., passed away at the age of 95 on April 16, 2021 after a period of failing health. Frank was surrounded by loved ones during his final hours. He was the son of Frank Sr. and Carrie (Janvrin) Chase and was a... View Obituary & Service Information

The family of Frank T. Chase, Jr. created this Life Tributes page to make it easy to share your memories.

Seabrook - Frank Tilton Chase Jr., passed away at the age of...