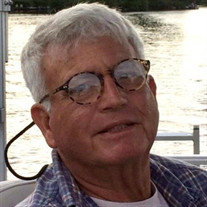 Nottingham - Frank “Pete” O. Walther III, 74, of Nottingham, New Hampshire, passed away on November 19, 2020. Pete was born in Montgomery County, Pennsylvania to Frank Otto Walther and Louise Livingston Smith Walther on April 30, 1946. He married his beloved wife Floortje Dykstra Walther on May 17, 2001 on the coast of New Hampshire. He flew for many years as a commercial airline captain for airlines including Braniff and Eastern. A graduate of Denison University, Pete was commissioned as an Ensign in the United States Navy in 1968, and was discharged as a Lieutenant on June 30, 1973. A veteran of the Vietnam War, Pete served as a naval aviator in the “Black Ponies” VAL-4, Light Attack Squadron 4, Vietnam. His medals and awards include: Distinguished Flying Cross, Air Medal (4 awards including Bronze and Gold Stars), Combat Action Ribbon, Navy Presidential Unit Citation, National Defense Service, Vietnam Service Medal, Republic of Vietnam Gallantry Cross Color, and Republic of Vietnam Meritorious Unit Citation. In addition to his impressive service to our country, Pete is well-loved and known as a gentle, loving soul with an open heart and a generous spirit. His love of animals led to a steady stream of table scraps to his cherished dogs. In addition to flight and family, Pete was an avid sailor who enjoyed voyages along the American Atlantic from the Caribbean Sea to the northern bounds of Nova Scotia, Newfoundland, and Labrador. He and Floortje enjoyed warm weather, spending summers at their lake house in New Hampshire, and wintering in Florida, where he and Floortje enjoyed the company of their good friends. Generous to the last, Pete chose to be an organ donor and had joked during his battle with cancer that “If they want any of my old body parts, they’re welcome to it.” Pete is preceded in death by his first wife Helen. Pete is survived by his wife Floortje, his children Heather (Ivan), Peter (Jamie), and Amanda (Jasen), stepchildren Arthur “Han” (Connie), and Matthew (Liliana), his brother Livingston “Bunt”, and grandchildren Avery (Heather), Van and PJ (Peter), Riley and Brixton (Amanda), Wyatt (Han), Avery and Cora (Matthew). We, his loving family and friends, wish him his own oft-invoked blessing of “fair winds and following seas”. An outdoor military funeral service will be held at 2:30 pm, Wednesday, November 25 at the New Hampshire State Veterans Cemetery in Boscawen, NH. All who wish to pay their respects are welcome. Masks are required. In lieu of flowers, donations may be made to Pete’s favorite charity, the New Hampshire SPCA PO Box 196, Stratham, NH 03885 A celebration of Pete’s life is expected to take place in Spring of 2021. Please check back for details.

The family of Frank Otto Walther III created this Life Tributes page to make it easy to share your memories.

Send flowers to the Walther family.