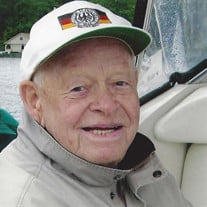 Hampton – Franz “Frank” S. Lenz, 97, of Hampton and formerly of Roslindale, MA, passed away peacefully on October 21, 2019 at the Portsmouth Regional Hospital surrounded by the family that he loved so dearly. Franz was born on July 13, 1922, in Rotthalmuenster, Germany, the son of the late Jakob and Theresa (Sedlbauer) Lenz. He grew up in Germany with his two sisters- Hilde and Anni and was a World War II veteran, serving in the German Navy. In 1954, he met his future wife, Lilly Luetzow, in the town of Waldshut. They fell in love, emigrated to Canada and were married in Montreal on September 15, 1956. In 1958, shortly after the birth of their son, Peter, they moved to Boston where they reconnected with long lost relatives. Frank and Lilly purchased their three-family home on Metropolitan Avenue in Roslindale in 1962, a great investment and a fantastic location to raise their family. They made life-long friends in the German community and in their neighborhood and welcomed their daughter, Karin, into their new home in May of 1963. Franz became a successful painting contractor and he and Lilly enjoyed traveling the world. Later in life, they especially enjoyed snow birding in Key Largo & Bradenton, Florida. In January of 2019, Franz and Lilly left their house of 56 years and moved to Hampton, NH to be closer to their children. They made friends in their new “Cornerstone” community, where Lilly continues to reside amongst friends. A family man in every sense of the word, Frank considered himself fortunate to witness the marriages of his son, Peter, to Marcia Gadsby, his daughter, Karin, to Jeremy Jasper and his grandson Erik to Megan Buda. He and the whole family were overjoyed at the birth of his two grandsons, Erik and Gregory. Sadly, Frank was predeceased by Gregory in 2011. Franz you will be missed! God Bless. “Ruhe Sanft.” Family and friends are invited to a Memorial Service at 12 PM on Saturday, November 9, 2019 at the Boylston Schul-Verein German Club, 8 County St., Walpole, MA. Burial will be private. In lieu of flowers, memorial donations may be made to the American Cancer Society PO Box 22478, Oklahoma City, OK 73123.

Hampton &#8211; Franz &#8220;Frank&#8221; S. Lenz, 97, of Hampton and formerly of Roslindale, MA, passed away peacefully on October 21, 2019 at the Portsmouth Regional Hospital surrounded by the family that he loved so dearly. Franz was born... View Obituary & Service Information

The family of Franz "Frank" S. Lenz created this Life Tributes page to make it easy to share your memories.

Send flowers to the Lenz family.