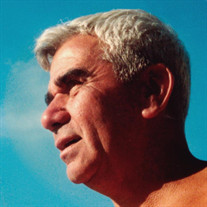 Hampton - Fred Benjamin Chadwick, 86, passed away at his home, surrounded by his loving family on May 21, 2022. He was born on January 23, 1936, in Honolulu, Hawaii, the son of the late Elbridge Shirley and Sarah (Rickard) Chadwick. When Fred was five years old, following the Japanese attack on Pearl Harbor in 1941, along with his mother and three siblings, he was forced to leave the island and come to Machias, Maine, his father's hometown, where his family welcomed them with open arms. It was there that he grew up and graduated from Machias High School in the class of 1955. He enjoyed his years there, participating in music (was the drummer for a local band), baseball, basketball, and other school activities. In 1954, he married Dorothy Jones, and together they raised six children: Debra, Sarah, Fred Jr., Austin, Julie, and Wendy. In 1981, he married Valerie-Ann (Perreault) Chadwick, and together they raised two children: Adam and Jacob. Fred worked for Standard Plumbing and Heating in Portsmouth as a master plumber for over 20 years and was a member of the Local 131 Plumbers and Pipefitters Union. He then went on to work as a maintenance foreman at GTE/Osram Sylvania for another 20 years. He loved being a part of Portsmouth and Hampton’s local baseball leagues. If he wasn’t coaching or umpiring, he was tending the fields to make sure they were top notch. He was a patriot, a loving, devoted father, grandfather, and husband. He was happiest with family, camping in the summers and snowmobiling in the winters. Fred is survived by his daughter, Debra Perry, husband Budd of Portsmouth, NH; his daughter, Sarah Desmarais, husband Ernest of Wells, ME; his son, Austin (Jonesie) Chadwick, wife Lisa of Moneta, VA; his daughter, Julie Gile, husband Dennis of Alfred, ME; his daughter, Wendy Chadwick of Sanford, ME; his son, Adam Chadwick, wife Andrea of Westfield, NJ; and his son, Jacob Chadwick, wife Courtney of West Bridgewater, MA. Fred was also lovingly known as “Papa” to 17 grandchildren and 21 great-grandchildren and nicknamed “Freddy Baby” by his ball players and friends. In addition to his parents, Fred was predeceased by his sister’s June McDonald, Alma Vane and his brother E. Gerry Chadwick, his son Fred, Jr and grandson, Jeremy. A Hawaiian themed visitation will be held from 11am to 12:30pm on Thursday, May 26, 2022 with a small service immediately following at 12:30pm at the Remick & Gendron Funeral Home-Crematory, 811 Lafayette Road, Hampton, NH 03842. Following the service, there will be a Hawaiian themed Celebration of Life from 1:30pm to 4pm at Master McGrath’s, 8 Batchelder Rd, Seabrook, NH 03874. In lieu of flowers, please consider donating to Wounded Warrior Project in Fred’s name by clicking here or by mail to P.O. Box 758516, Topeka, Kansas 66675-8516.

Hampton - Fred Benjamin Chadwick, 86, passed away at his home, surrounded by his loving family on May 21, 2022. He was born on January 23, 1936, in Honolulu, Hawaii, the son of the late Elbridge Shirley and Sarah (Rickard) Chadwick. When... View Obituary & Service Information

The family of Fred B. Chadwick created this Life Tributes page to make it easy to share your memories.

Hampton - Fred Benjamin Chadwick, 86, passed away at his home,...

Send flowers to the Chadwick family.