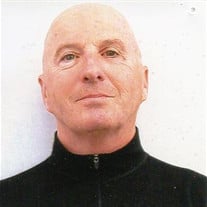 Newmarket – Frederick G. Gaudette, Sr., 69 of Newmarket, died Saturday, June 10, 2017 at Frisbee Memorial Hospital in Rochester. He was born September 1, 1947 in Beverly, Mass., a son of the late Gerard E. and Mary E. (Eastman) Gaudette. Fred was raised in Peabody and graduated from Peabody High School with the Class of 1966. He was a veteran serving with the US Coast Guard. He was employed as a power plant engineer for the General Electric plant in Lynn, Mass., retiring after 20 years of service. Fred was an avid hiker and member of the Appalachian Mountain Club, enjoyed ballroom dancing and photography. He leaves his loving partner, Gwynne Wagner of Newmarket, his sons, Eric Gaudette and his wife Michelle of Peabody, Mass., Frederick Gaudette, Jr. and his wife Melissa of Georgia, four grandchildren, Ryan, Brittany, Hailey and Steven, his brother, Barry Gaudette and his wife Patty of Dunfries, VA, and several nieces and nephews. He was predeceased by his brothers, Edward and Gary Gaudette. Gwynne Wagner and Eric Gaudette would like to thank Frisbee Hospital for their excellent care and compassion during Fred’s last days. Private services will be held at the convenience of the family. If desired, donations may be made to the Appalachian Mountain Club, 5 Joy Street, Boston, MA 02108 or via their website www.outdoors.org/tribute.

The family of Frederick Gerard Gaudette Sr. created this Life Tributes page to make it easy to share your memories.

Send flowers to the Gaudette family.