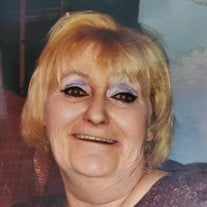 Salisbury, MA – Gail M. Lattime, 63, of Salisbury, passed away peacefully on Saturday, February 27, 2021. She was born in Newburyport, MA on February 19, 1958, the second of four daughters of the late Walter E. Perkins and Barbara J. (Gardener) Gallagher. She was a lifelong resident of Salisbury, who married the late Donald A. Lattime Jr. and went on to have one daughter. Gail was a kind and gentle person who never had a negative word to say about another. She always thought of others first, putting them before herself. She had a steady strength which enabled her to face the challenges in her life and allowed her to be accepting of everyone regardless of their position or views. Material possessions were not important to her. Her most valued treasures were her family; her daughter, her sisters, brother in law, significant other, nieces, nephews and grandchildren and her two dogs, Scout and Twinkles. She was happiest with the simple pleasures of life; taking care of her yard, feeding the birds and spending time with her animal's especially her two dogs who she loved tremendously. Gail's heart was so big it had room for everyone and everything. She would take in people and animals who needed someone to love them throughout her life. If you needed someone her door was always open, she was always there to listen and her shoulders were always there to take a little of the burden. Surviving family members include her daughter, Brandy Lattime of Salisbury; sisters, Linda Fraize of Seabrook and Janet Dow and Husband David Dow of Seabrook; significant other, Clinton Pike Jr. of Salisbury and his daughter Alyssa Pike of Kingston, NH and many grandchildren, nieces and nephews In addition to her parents and husband, she was predeceased by her step-father, Richard Gallagher and sister, Jill Lattime. Her huge heart of love, kind accepting soul and non-judgmental ways will be greatly missed by all who knew and were touched by her. Her loss leaves an aching hole for her family and friends which will never be filled but all are so blessed to have had this beautiful soul in their lives and hearts. Services will be at 1 PM on Saturday, March 20, 2021 at the East Parish United Methodist Church, 8 Lafayette Road Salisbury, MA 01952 with a reception to follow. Assistance with arrangements was by the Remick & Gendron Funeral Home-Crematory, Hampton. In lieu of flowers, donations may be made to the family in their time of need.

Salisbury, MA &#8211; Gail M. Lattime, 63, of Salisbury, passed away peacefully on Saturday, February 27, 2021. She was born in Newburyport, MA on February 19, 1958, the second of four daughters of the late Walter E. Perkins and Barbara J.... View Obituary & Service Information

The family of Gail M. Lattime created this Life Tributes page to make it easy to share your memories.

Send flowers to the Lattime family.