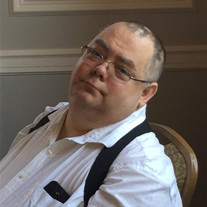 Boxford, MA – Garth G. Tolman, 58, of Boxford, formerly of Newmarket, NH, died April 21, 2018 at Beverly Hospital after a brief illness. He was born in Portsmouth, NH, March 13, 1960, a son of Ethan and Pamela (Agambar) Tolman of York, ME. Garth graduated from Keene High School, Keene, NH with the Class of 1978. He attended the University of New Hampshire and received his Bachelor degree from Massachusetts Institute of Technology in 1982. Garth grew up in Nelson, NH, near Mt. Monadnock. He was primarily an electrician and telephone engineer for all of his working life, spending the last 11 years working for Siena Engineering Group in Burlington. He had made his home in Boxford since 2001, coming from Newmarket, where he had resided since 1982. He was a part-time police officer in Newmarket, having graduating from the NH Police Academy in 1986. He was an active member of the force until his death. Garth was a member of the Permanent Building Committee of Boxford. The Town Selectmen have declared that in his honor, they will be flying all town flags at half-mast on May 31, 2018. In addition to his parents, he leaves his wife of 21 years, Lesley (Nelson) Tolman, two daughters, Maddie Tolman of Boxford, and Melissa Kay Perkins and her husband Chip and their son Coleman of Nottingham, NH. He also leaves two brothers, Matthew Tolman of Nelson, NH and Seth Tolman and his wife Linda of Keene. He also leaves a nephew Colby, son of his brother Matthew. Garth was a person of prodigious intelligence and generosity. There has been a massive outpouring of grief and love from the many people whose lives he touched. He made lasting contributions to NH law enforcement and to telecommunications on a national scale. Both communities are planning life celebrations to which anyone is welcome. Private services for family and friends will be held later in the summer. If desired, donations may be made to the Newmarket Police Relief Association, 70 Exeter Street, Newmarket, NH 03857. Arrangements are by the Remick & Gendron Funeral Home, Hampton, NH.

The family of Garth G. Tolman created this Life Tributes page to make it easy to share your memories.

Send flowers to the Tolman family.