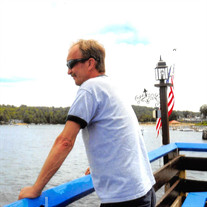 Hampton – Gary P. Harris, 59, of Hampton, died suddenly, Wednesday, December 13, 2017 after being stricken ill at his home. He was born May 13, 1958 in Danvers, MA a son of the late Alfred E. and Beverly L. (Wentworth) Harris. Gary was raised in Hamilton, MA and graduated from Hamilton Wenham High School. He was employed as a painter for many years and more recently was working at Telly’s Restaurant in Epping. He made his home in Hampton since the early 1990’s, enjoyed ice fishing and fresh water fishing. He loved spending time at his camp on Alton Bay. He leaves his wife, Lyn A. (Morrison) Harris of Hampton, his brother, Kevin Harris of Billerica, MA, his sister, Cheryl Shaw of Raymond, his niece, Jillian Carter and her husband Ryan and his nephew Justin Shaw. Visiting hours will be from 2-4 P.M. Saturday, December 16, 2017 at the Remick & Gendron Funeral Home-Crematory, 811 Lafayette Road, Hampton. Relatives and friends are respectfully invited. Private burial will be in the High Street Cemetery, Hampton. In lieu of flowers, donations may be made to the National Kidney Foundation, Inc., 30 East 33rd Street, New York, NY 10016, www.kidney.org.

The family of Gary P. Harris created this Life Tributes page to make it easy to share your memories.

Send flowers to the Harris family.