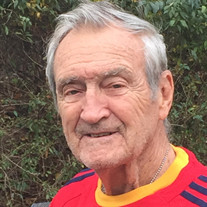 Parsippany, NJ – Gary Lee Seeger, 89, of Parsippany, NJ passed away peacefully at his home in NH on Monday, March 18, 2019. Gary was born on June 20, 1929 in Dover, NJ, a son of the late Charles A. and Emily (Crater) Seeger and shared 60 years of marriage with his late wife, Barbara Anne (Roh) Seeger. Gary was raised on Hillside Avenue in Kenvil, NJ and was a graduate of Roxbury High School. After attending Muhlenberg College, Gary enlisted in the United States Navy. He graduated as Honorman of Company 405 in his Navy Boot Camp Class at Great Lakes, IL and was awarded the honor of picking his next job. Gary chose to honorably serve his country as a Disbursing Clerk. Graduating top of his class in Disbursement School, he earned the additional honor of selecting his duty station, choosing to serve onboard the USS Salem (CA139). Upon his discharge from the Navy, Gary completed his college education using the G.I. Bill and graduated from Upsala College of East Orange, NJ where he received the Upsala Award for academic excellence. While at Upsala, he met his wife Barbara and they married in 1957. Settling in Morris County to raise a family, they attended the Presbyterian Church of Morris Plains. Gary worked as a Certified Public Accountant and Internal Auditor for Drew Chemical Company of Boonton, NJ and NYC, and for acquiring companies. He retired from Ashland Oil Inc. in 1990. Gary found enrichment in helping others and in his retirement years, volunteered for many years at St. Claire’s Hospital. Gary and Barbara moved near their children in New Hampshire, in 2016. To say that Gary was a music enthusiast would be an understatement. He loved music, especially “Big Band” era, and was a music aficionado who could recall facts about songs and the artists that performed them, without hesitation. Music was his passion! He also enjoyed gardening and collecting stamps, and after living in New Hampshire for a time became a staunch and loyal New England sports fan. Gary is survived by his daughter, Janet Lee Seeger and her husband, Trevor Marshall of NH, and his sister, Linda Silcox of Florida. In addition to his wife Barbara who died in 2017, Gary was predeceased by his youngest daughter, Audrey Seeger, and his brother, Chris Seeger. In honor of Gary’s gentle love of animals, the family suggests memorial donations be made to the New Hampshire SPCA, PO Box 196, Stratham, NH 03885 https://nhspca.org/donate-today/.

The family of Gary L. Seeger created this Life Tributes page to make it easy to share your memories.

Send flowers to the Seeger family.