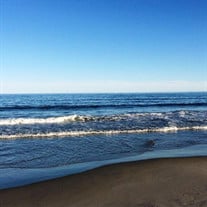 Hampton - George “Skip” Briand, 71, of Hampton, passed away on Friday, November 4, 2016 after a brave battle with Leukemia. Skip was born in Dover on March 21, 1945 to Ernest and Bella (Legere) Briand. He was a graduate of Somersworth High School and served with the N.H. National Guard in Vietnam. Skip worked at General Electric in Somersworth and then at the Portsmouth Naval Shipyard, retiring in 2005. He worked the last few years at Seacoast Florist in Hampton. He enjoyed traveling to the White Mountains with his wife, NASCAR, all New England sports teams, collecting baseball cards, and spending time with his grandchildren. Skip is survived by his wife of 34 years, Claire (Thibault) Briand of Hampton, his children Kenneth (Kristen) Briand of Rochester, Gary (Debbie) Briand of Barrington, and Paula Panteledes of West Newbury, Massachusetts, his stepsons John Chasse of Bedford, and Brian Chasse of New Durham, his grandchildren Brittney Carter, Tyler and Aimee Briand, and Isabella and Olivia Panteledes, and step grandchildren Amber, Ryan, Evan, and Olivia Chasse. He is also survived by his sister Linda (Jim) Sunderland of Barrington and brother Don (Marjorie) Briand of Dover, a special niece, Megan Benitez and her husband Moises and children Joseph and Andreya of Floresville, Texas. Skip also leaves behind special friends, Beverly and Richard Ward and family of Hampton and lifelong friend, Bill McDaniels of Charleston, South Carolina. He was fortunate to have in his life many other nieces, nephews, cousins, and special aunts. Skip was predeceased by his parents, brother, Paul “PJ” Briand, and stepson, Jeff Chasse. A mass of Christian burial will be celebrated at 11 A.M. Wednesday, January 11, 2017 at Our Lady of the Miraculous Medal Church, 289 Lafayette Road, Hampton. Donations in Skip’s name may be made to your local SPCA or consider becoming a blood or platelet donor in the fight against leukemia. Assistance with the arrangements was by the Remick & Gendron Funeral home-Crematory, Hampton.

The family of George "Skip" Briand created this Life Tributes page to make it easy to share your memories.

Send flowers to the Briand family.