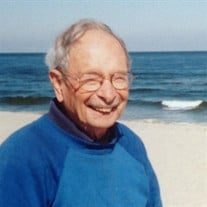 Rye – George Castleton, 91, a former longtime resident of Seabrook, passed away on Christmas Eve, December 24, 2016 at Webster of Rye where he had been living due to failing health. George was surrounded by his loving and devoted family. He was born in Lewiston, ME on March 22, 1925, a son of the late Louis H. and Stella (Pettengill) Castleton. Although born in Lewiston near his mother’s family, George spent his early childhood in Brooklyn, NY. His family relocated to Salem when he was 8 years old and then to Exeter while in his teens where he met the love of his life, Madalene L. Woodard. George and Madalene married in 1946 and moved to Seabrook in1949 to raise their family. George worked as a station master for the B&M Railroad until 1957 and when the railroad started cutting back, George entered into the insurance industry. He worked briefly for MetLife and Nationwide before founding Castleton Insurance in Seabrook in 1966. George was a Navy veteran of WWII. He saw action in the Pacific Theatre on the islands of Okinawa and Tinian as one of the Fighting Seabees of CDB-1036 and earned two battle stars for his service. While on Tinian, he served as a member of the Seabees’ longshoreman unit known as the “Stevedorables” and unloaded the components of the atomic bomb used to end the war with Japan. He was a lifelong member of the Raymond E. Walton American Legion Post 70 of Seabrook and a 46 year member with the Masons of the St. James Lodge No. 102 F. & A.M. of Hampton. George was also very active with Madalene as 4H Leader and volunteered as Boy Scout Leader with the local troop. Additionally, George served as a Deacon and Lay Minister for the Trinity United Church of Seabrook. George leaves his sons, Carl Castleton and his wife Dulce of Bahia, Brazil and Eric Castleton and his wife Chela of La Palma, Panama; his daughters, Susan Slocombe and her husband, George of Kingston and Nancy Sarni and her husband John of North Hampton. He is also survived by his 8 grandchildren, several great grandchildren and great great grandchildren and many nieces and nephews. In in addition to his beloved wife Madalene who died earlier this year, George was predeceased by his parents, his brothers, William Bitomske and Toby Castleton and his sister, Marjorie Eldredge. Family and friends may visit from 11 am to 12 pm on Friday, December 30, 2016 in the Remick & Gendron Funeral Home – Crematory, 811 Lafayette Rd., Hampton. Services including the Masons and American Legion will follow the visitation starting at 12 pm in the funeral home. Family and friends are respectfully invited. Burial will be private. Family flowers only please, if desired, memorial donations in George’s name may be made to the Raymond E. Walton Post 70, 169 Walton Rd., Seabrook, NH 03984.

Rye &#8211; George Castleton, 91, a former longtime resident of Seabrook, passed away on Christmas Eve, December 24, 2016 at Webster of Rye where he had been living due to failing health. George was surrounded by his loving and devoted family. He... View Obituary & Service Information

The family of George Castleton created this Life Tributes page to make it easy to share your memories.

Send flowers to the Castleton family.