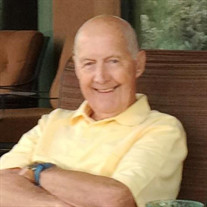 North Hampton – George R. Chase, 93, of North Hampton and formerly of Seabrook, passed away peacefully at his home on Wednesday, October 13, 2021 after a very brief illness. George was surrounded by those he loved. He was born in Newburyport, MA on January 25, 1928, a son of the late Charles and Ruth (Rowe) Chase. George shared over 59 years of marriage with his beloved wife, Delores (Fizer) Chase. He was raised in Seabrook and graduated from Amesbury High School with the Class of 1946. George enlisted in the United States Army after high school and served his country honorably as part of the Japanese Occupation Forces after World War II. Upon his discharge, he returned home and earned his Associate’s Degree in Accounting from Burdette College. He went to work at the Portsmouth Naval Shipyard for the next 6 years before taking a position as an auditor with the Department of the Interior, United States Fish & Wildlife Service for the next 28 years. He was responsible for auditing all of their Federal programs covering 13 states, helping to ensure the States remained eligible for many federal grants. He retired from government service in 1983. Not one to sit idle, George then became a self-employed handyman/contractor, fixing, repairing, replacing and remodeling for homeowners throughout the Seacoast. He and Delores enjoyed traveling whenever they got the chance. One of their favorite trips was celebrating their 50th wedding anniversary on a river cruise throughout Europe and meeting lifelong friends. For the past 11 years, he and Delores split their time between summers in North Hampton and winters in Gold Canyon, AZ. His favorite annual vacation for the past 25 years was with Shirley and John Moore in Hilton Head, SC riding bicycles along the beach. Some of George’s favorite memories were his surprise 90th birthday party with family and friends, the many oystering trips on Great Bay, clamming on Hampton River and Father’s Day fishing trips with the children. George loved his town of North Hampton. He was always involved in community service – he was North Hampton School Treasurer for 34 years, a church trustee and Delores’ assistant with whatever was needed at the North Hampton Bandstand. George was a member of The Hamptons American Legion Post 35 and the Portsmouth Elks. In addition to Delores, George is survived by his daughter, Debra Chase of Rye and his sons, Daniel of Hampton, David and his wife Deborah of North Hampton and Brian also of Hampton. He also leaves his grandchildren, Stefanie Biron, Nathan, Jason and Megan Chase and Josh and Ben Chase, Jessica, Murray and Michael Biron and Lisa Chase, his brother, Thomas Chase and his wife Lori and his sisters, Jane Andrews and Muriel Consigli. George was predeceased by his parents, his son, Allen, and his brothers, Charles and Raymond. Family and friends may visit from 4 to 7 PM on Tuesday, October 19, 2021 in the Remick & Gendron Funeral Home-Crematory, 811 Lafayette Road, Hampton. Services will be held at 2 PM on Wednesday October 20, 2021 at the United Church of Christ, 295 Atlantic Ave., North Hampton. Masks are required at church. Burial will be private. If desired, memorial donations may be made to Friends of the North Hampton Bandstand P.O. Box 3 North Hampton, 03862.

North Hampton &#8211; George R. Chase, 93, of North Hampton and formerly of Seabrook, passed away peacefully at his home on Wednesday, October 13, 2021 after a very brief illness. George was surrounded by those he loved. He was born in Newburyport,... View Obituary & Service Information

The family of George R. Chase created this Life Tributes page to make it easy to share your memories.

Send flowers to the Chase family.