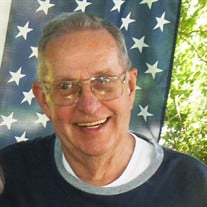 Portsmouth - George William Elliott of Portsmouth passed away on August 28, 2018 after a brief, but courageous battle with cancer. He will be remembered as a loving husband, father, and grandfather. George was born July 3, 1928 in Winchester, MA to Harold King and Helen Frances (Greeley) Elliott. He was a US Army veteran of World War II, serving in the Aleutian Islands. He graduated from Boston College in 1955 with a degree in engineering. After college he worked as an engineer at Raytheon before settling into a long-time career at the Portsmouth Naval Shipyard as a Quality Engineer. He retired from the Shipyard in 1993 as a deputy director of the NAVSEA Material Quality Assessment Office. George spent his later years enjoying retirement, having more time to spend in his beloved garden. He was well-renowned in the area for his giant beefsteak tomatoes. George was a family man with a quick wit. He could often be found pushing his walking buddy - his granddaughter - around town in her stroller. George was an avid, lifelong fan of the Red Sox and Patriots. Despite the challenges he faced near the end of his life, he always made time to cheer on the Sox with his family. He is survived by his wife of 58 years, Martha Susan (Nixon) Elliott of Portsmouth NH; his two daughters, Karen (Elliott) Freeman of Thornton, CO, and Elaine Elliott-Leavitt and her husband Jeffery Leavitt, and his granddaughter Gabrielle Leavitt, all of Rye. In addition to his parents, George was pre-deceased by his older brother, Harold King Elliott, Jr and older sister, Helen Frances (Elliott) Price. Visiting hours will be held on Tuesday, September 4, 2018 from 5:00 to 7:00 PM in the Remick & Gendron Funeral Home – Crematory, 811 Lafayette Rd., Hampton. A Mass of Christian Burial will be celebrated at 10 AM on Wednesday at Our Lady of the Miraculous Medal Church, 289 Lafayette Rd., Hampton. He will be interred at the New Hampshire State Veterans Cemetery in Boscawen, NH at a later date. The family requests that in lieu of flowers, gifts may be made to the Jimmy Fund / Dana-Farber Cancer Institute in memory of George W Elliott to support cancer research and patient care at Dana-Farber Cancer Institute, P.O. Box 849168, Boston, MA 02284 or via www.jimmyfund.org/gift.

Portsmouth - George William Elliott of Portsmouth passed away on August 28, 2018 after a brief, but courageous battle with cancer. He will be remembered as a loving husband, father, and grandfather. George was born July 3, 1928 in Winchester,... View Obituary & Service Information

The family of George W. Elliott created this Life Tributes page to make it easy to share your memories.

Send flowers to the Elliott family.