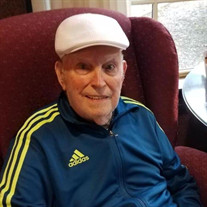 Tewksbury, MA &#8211; George R. Hughes, 93, of Tewksbury, MA, passed away peacefully at the Partridge House in Hampton, NH on Sunday, December 5, 2021 surrounded by people who truly loved and cared for him. He went to join his Lord and Savior,... View Obituary & Service Information

The family of George R. Hughes created this Life Tributes page to make it easy to share your memories.

Send flowers to the Hughes family.