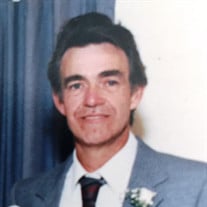 Exeter – George Albion Ireland, 70, of Exeter and a former longtime resident of Rye, died at his home on Wednesday, December 9, 2015 after an extended illness. George was born on November 27, 1945 in Portsmouth, a son of the late Charles and Dorothy (Brown) Ireland. George was a lifelong resident of Rye before relocating to Exeter in 2013. He married the love of his life, the late Patricia E. (Ashcroft) Ireland and they settled in Rye to start their family. George was an amazing stonemason by trade and had worked for various employers over the years before retiring in 2005. George was a wonderful father and a fantastic provider for his family. He was extremely creative, and an outdoorsman at heart. He enjoyed hunting, fishing, farming, and spending time with nature whenever possible. He is survived by his sons, Brandy Ireland and his wife, Cynthia, of Newmarket, Mark Ireland and his wife, Kim, of Beverly Hills, FL, and Michael Keith Ireland of Myrtle Beach, SC; his daughter, Temple Ireland-Rosenberger and her husband, John, of Brookline; his brothers, Charles Ireland, Jr. and his wife, Josephine, of Greenland and Larry Ireland and his wife, Christine, of York, Me. He also leaves his grandchildren, Priscilla Ann Ireland, Lencie Ireland, and Josh Ireland. In addition to his parents and his beloved wife, Patricia, who passed in 2000, George was predeceased by his brother, Douglas Ireland. Family and friends may visit from 5:00 PM to 7:00 PM Friday, December 18th in the Remick & Gendron Funeral Home–Crematory, 811 Lafayette Rd., Hampton. Services will be held at 11:00 AM on Saturday, December 19th in the funeral home. Burial will be in the Central Cemetery, Rye. If desired, donations may be made in his name to: New Hampshire S.P.C.A. PO Box 196, Stratham, NH 03885.

Exeter &#8211; George Albion Ireland, 70, of Exeter and a former longtime resident of Rye, died at his home on Wednesday, December 9, 2015 after an extended illness. George was born on November 27, 1945 in Portsmouth, a son of the late Charles... View Obituary & Service Information

The family of George A. Ireland created this Life Tributes page to make it easy to share your memories.

Exeter – George Albion Ireland, 70, of Exeter and a former longtime...

Send flowers to the Ireland family.